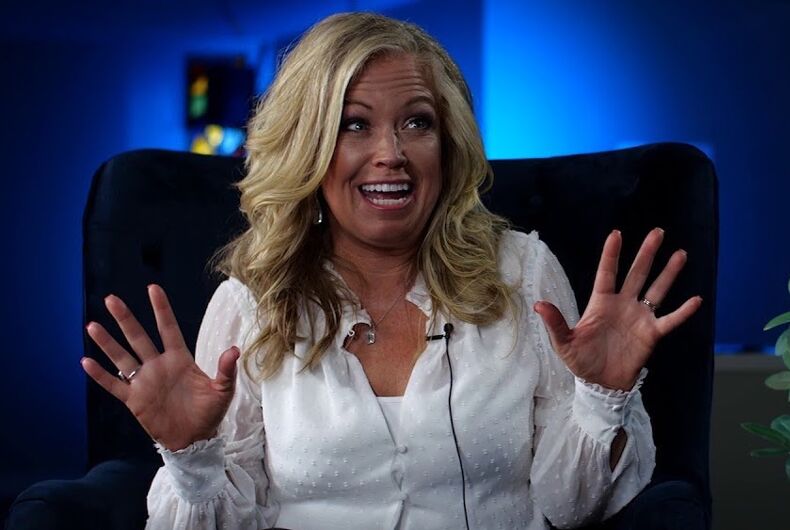 Elizabeth Johnston, aka Activist Mommy, an anti-LGBTQ social media activist, has filed for divorce from her husband, Patrick Johnston, the father of her 10 children, because “he has been repeatedly unfaithful to me, as well as psychologically and emotionally abusive, bringing an end to our marriage of 22 years.”

While Johnston’s marriage was falling apart, she continually posted against same-sex marriage on Facebook.

In a public Facebook post, Johnston wrote that she repeatedly tried to resolve her marital issues by meeting with pastors and therapists, temporarily separating from him, and trying various “sanctions” and “discipline.” However, she admitted:

After repeatedly taking him back, covering for him, preserving his reputation, and forgiving him of adultery, pornography and sexual immorality, which began 16 years ago, I have been forced to come to the harsh realization that I’ve done all I can and am entrusting Him to my Savior! I don’t share this to harm or humiliate, but to help explain why I, a Christian woman who hates divorce, have decided to separate and pursue a divorce.

“The deception and aggression has recently gotten very unhealthy,” she continued, “so I am being forced for the sake of my children to make the hardest decision of my life. To stay at this point would be more harmful to my children than to separate.”

She added, “I will be blasted for not staying married. Don’t listen to the critics, and just pray for us instead.”

She then said that “The Lord will be my husband,” and pledged to continue writing anti-LGBTQ screeds because “I can’t let Satan win.”

Her public statement about her marriage and airing of her husband’s dirty laundry was “cleared by my legal counsel and my spiritual mentors,” she said.

Johnston regularly rants about “far left, pro-LGBTQ education” on her social media platforms and once spoke at a barely-attended ex-gay march on Washington. She has spouted her anti-LGBTQ views on the radio show of the certified hate group, the Family Research Council, and uses her Facebook wall to oppose everything from drag queen story times at local libraries and giving life-saving hormone blockers to transgender kids to queer actor Billy Porter and trans dancer Riley Knox performing in public.

She called for a boycott of Vicks VapoRub over their commercial in support of transgender rights, referring to the woman in the ad as “a square-jawed, plain-as-day man.” She also pressured a local library to cancel its LGBTQ prom, telling her social media followers “perversion is taking place in a taxpayer-funded library!”

Stop comparing the response to coronavirus to the early response to AIDS. It’s insulting.