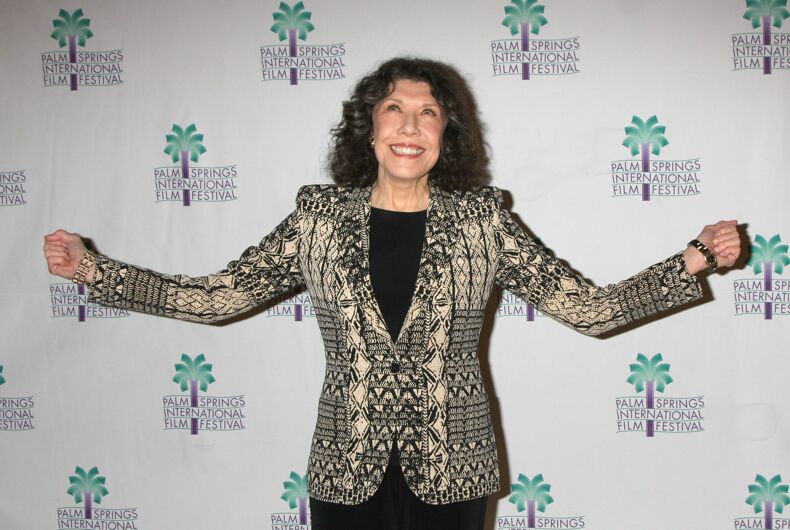 Lily Tomlin at the "Grandma" Q & A at PSIFF at the Annenberg Theater at Palm Springs Art Museum on January 4, 2016 in Palm Springs, CAPhoto: Kathy Hutchins / Shutterstock.com

Lily Tomlin’s career as an actress, comedian, producer and singer has stretched over 50 years, and now the 80 year-old out actress is getting appropriately honored as a icon.

Related: Why Lily Tomlin chose not to come out on the cover of Time Magazine in 1975

They cite Tomlin’s eight Emmys, two Peabody Awards, Tony and Grammy along with her “remarkable career starting in the 1960s” as their reasoning behind the honor. Tomlin has also been awarded by the Kennedy Center Honors, a star on the Palm Springs Walk of Stars in California, and the Screen Actors Guild’s Lifetime Achievement Award in 2017.

Ben Mankiewicz, the host of the TCM Classic Film Festival and an anchor on the television network, reflected on Tomlin’s impact on the entertainment industry. “Not long ago, Tomlin told The New York Times, ‘I wanted people to see the characters as human beings. And see themselves in them, too.’ The humanity she finds in the women she plays has enabled her to transition, seemingly with ease, from groundbreaking work on Rowan & Martin’s Laugh-In to four Emmy nominations for Grace and Frankie…there’s a consistent richness to her work, in comedy and drama, as well as on stage.”

This is TCM’s eleventh year in a row holding its own print ceremony, following the likes of Billy Crystal in 2019, Cicely Tyson in 2018, and Tomlin’s Grace and Frankie co-star Jane Fonda in 2013.

The handprint and footprint ceremony is free and open to the public, but the time has yet to be announced.

Tomlin has been married to her partner, film producer and writer Jane Wagner, since 2013 – but they have been together for nearly 50 years. When they are not working on some production – sometimes together, such as Moment by Moment and The Incredible Shrinking Woman, they are avid activists for LGBTQ rights and other causes. They are both benefactors of the Los Angeles LGBT Center. In December, Tomlin was arrested at Fonda’s weekly “Fire Drill Fridays” climate change protest in Washington, D.C.

In addition to Grace & Frankie, Tomlin also voices Ms. Frizzle in The Magic School Bus franchise, portrayed Deborah Fiderer in The West Wing, and has appeared in the shows NCIS, Desperate Housewives, Sesame Street, and The Electric Company. Her list of movie roles includes Jane Hathaway in The Beverly Hillbillies, Vivian in I Heart Huckabees, Mrs. Berenger in The Pink Panther 2, and the voice of Aunt May in 2018’s Spider-Man: Into the Spider-Verse.