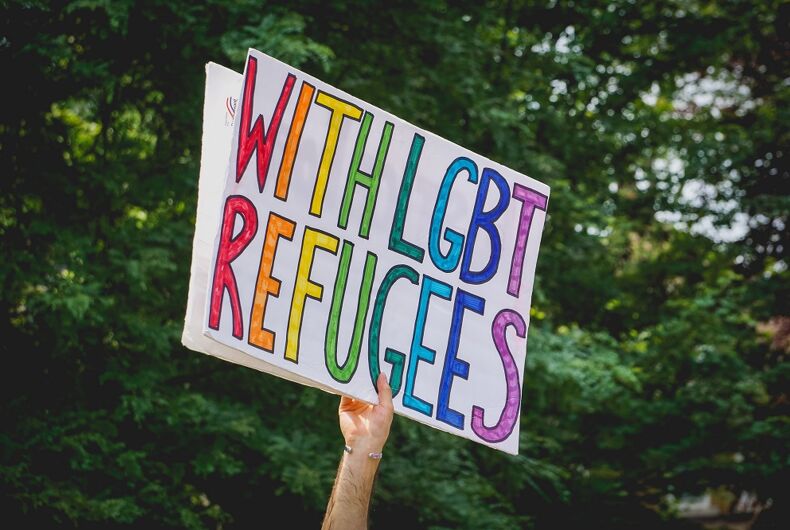 JUNE 30, 2018: An activist in Detroit holds a protest sign that says "With LGBT Refugees."Photo: Shutterstock

A gay refugee from El Salvador who said he fled gang violence and spent a year traveling to get to the U.S. before being promptly sent to Guatemala is suing the Trump administration.

Several people who tried to apply for asylum in the U.S. were sent to Guatemala instead and are saying they weren’t even informed of their rights, according to a lawsuit filed by the ACLU and the National Immigrant Justice Center.

“U.T,” 23, said in the complaint that a member of the MS-13 in El Salvador attempted to have sex with him and threatened him when he refused. He came out to his family, who disowned him; his mother said that she would rather have a dead son than a gay son.

He said that he traveled in El Salvador looking for a place where he could be himself, but he didn’t find it. He feared he would be killed there, so he left the country and spent a year getting to the U.S.-Mexico border.

But last year, Donald Trump signed an agreement with Guatemala to take in asylum-seekers. The “safe third country” program is an attempt to reduce the number of Central American refugees in the U.S. by, ironically, sending them to a country where 200,000 of its own citizens fled to the U.S. last year.

Guatemala is especially dangerous for LGBTQ people. U.T., using the name “Pablo” when talking to Buzzfeed News, said that he traveled through Guatemala on his way to the U.S. but was harassed along the way.

“They called us gay and a number of other words,” he said. “They told us we ruined the ambiance just for being there.”

He tried to explain why he would still be in danger in Guatemala during a short interview with an immigration official in the U.S., but he was still sent away.

A 2012 report from the International Gay and Lesbian Human Rights Commission said that states that LGBTQ people in Guatemala face “cruel, inhuman and degrading treatment, including a constant threat of violence that amounts to torture, forced disappearances, sexual violence in detention centers, and non-consensual medical testing.”

The country also suffers from general instability – around 200,000 people from Guatemala fled for the U.S. last year alone.

While a U.S. told Buzzfeed News “All asylum-seekers who are sent to Guatemala have chosen to go,” U.T. said that he was told he either had to get on a government plane to Guatemala or get sent back to El Salvador.

“It’s all a big farce,” he said. “Why? I was feeling really deceived — all of my sacrifices had been in vain. Now I’m being thrown to Guatemala [where I won’t be protected]. I was feeling broken about the situation.”

As he was being processed in Guatemala, he was told he would not be given housing for more than a month even though he would not be legally allowed to work in the country. An immigration official told him to apply for asylum in Mexico because “Guatemala has nothing to offer you.”

According to the ACLU’s lawsuit, he is now in Mexico.

“Like so many people who have been shut out from safety by this administration, Pablo believed the United States would provide him safety,” said Karen Zwick of the National Immigrant Justice Center.

The organizations argue that the program violates the rights of asylum-seekers who are not told they have a right to apply for asylum in the U.S. instead of being sent to Guatemala or their other legal options. They say the program denies the refugees their rights under federal law.

“This is not a true choice,” said Zwick. “The plaintiffs in the case, as well as others we interviewed, made it plain that the option of remaining in the United States to seek asylum was never presented as a viable option.”

He is not the only gay refugee who said they were sent to Guatemala by the U.S.

“Josué” also talked to Buzzfeed News and he said that he fled from Honduras after he and his boyfriend’s lives were threatened by four men who called them “fa***ts” and said that they would turn them into “men” by beating them up.

“I told my boyfriend to run,” Josué, 20, said. “I stayed so they wouldn’t run after him. They threw me to the floor. They attacked me — I screamed for help.”

“They left me beaten and told me they wanted me to disappear because they didn’t want fa***ts in their community.”

Josué said that he is considering going to Mexico as well.

“To be honest, I have no idea what I will do in Guatemala,” he said. “I think my best option would be to go back to Mexico or hide in secret. I’ll continue to suffer humiliation and persecution.”

Susan B. Anthony was a lesbian hero but they don’t teach you that in history class