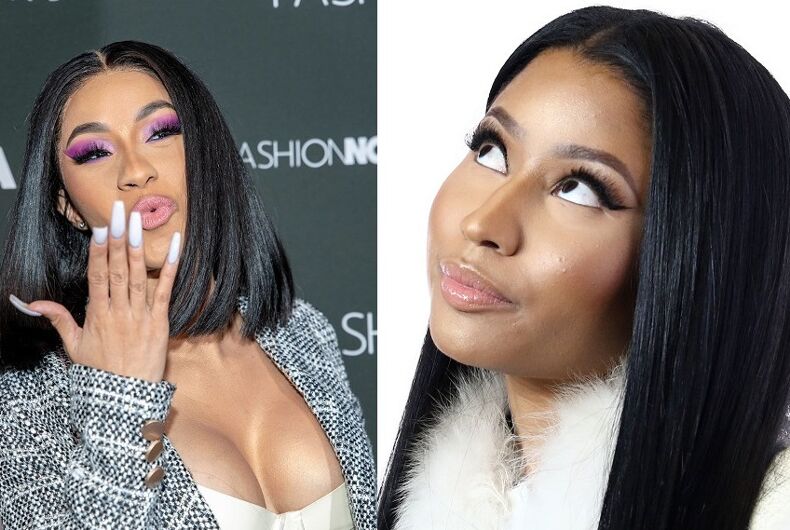 A married gay couple divorced on TV following a dispute over their different love of two female rappers: Cardi B and Nicki Minaj.

The two rappers have notoriously feuded in public, and the two men argued over which rapper started the conflict. That argument was so bad that it led to divorce.

Related: This rapper says she isn’t homophobic because she has a gay hairdresser

A recent episode of the reality TV show Divorce Court featured Don’te and D’Andrew Leaphart, a couple that has been married for two years after dating for two and a half. While Don’te is a Cardi B fan and D’Andrew Leaphart is a Minaj fan, Don’te said that their “silly” feud merely worsened their underlying relationship issues.

The show’s Judge Lynn Toler asked in disbelief whether the couple’s separation really began with a disagreement over the rappers. Don’te admitted that he views D’Andrew as an ungrateful and disrespectful partner who “got in Don’te’s face” while the two argued about the rappers.

As D’Andrew tried to defend himself by talking over Don’te, saying that he merely got up in Don’te’s face in the heat of their argument, Don’te said D’Andrew’s talking over him was further proof of D’Andrew’s disrespect. Don’te told D’Andrew, “You’re gonna be rude your whole life.”

Here is video of the couple’s argument on Divorce Court:

#Yikes! It seems the #NickiMinaj and #CardiB beef went deeper than the #Press! Find out how this rap battle landed these two in #DivorceCourt ready to let #AllThingsGo. Who’s side are you on, Jurors?

Rumors of Cardi B and Nicki Minaj’s feud began in 2017 when the two rappers collaborated on “Motorsport,” a track by the American hip-hop group Migos. At the time, fans speculated whether the women’s separate raps in the song were meant to disrespect one another, but both women shot the rumors down as baseless drama.

However, the rap icons soon began an actual feud that played out over the next year on Instagram, Twitter, and in separate musical collaborations with other male rappers. While fans ate up the feud, it apparently contributed to Don’te and D’Andrew’s divorce.

The full segment with the Leapharts is below.