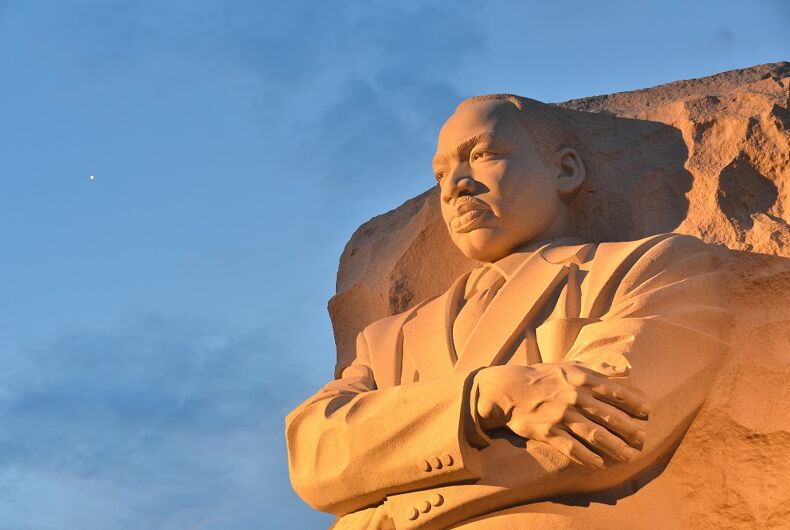 The Martin Luther King Jr Memorial located on the National Mall on the Tidal Basin in Washington DC on May 2 2012. Photo: Shutterstock

The Rev. Dr. Martin Luther King, Jr.’s legendary “I Have a Dream” speech is bound to be quoted, analyzed, and dissected in dozens of different ways.

If you’re a visual learner like me, you’ll particularly appreciate the following infographic from Nancy Duarte of Duarte Design.

Duarte mapped out Dr. King’s sixteen-minute speech, starting with the way he shifted between describing the current civil rights landscape and outlining his dream for the future. She then added bars, with each one representing a block of text King spoke. Every time Dr. King took a breath, Duarte began a new bar, creating a visual representation of the speech’s cadence.

Then she color-coded the bars – blue for where Dr. King repeated important words or phrases for emphasis; pink for visual descriptors and metaphors; green for references to familiar hymns, literature, and scriptural passages; orange for mentions of political documents like the Declaration of Independence and the Constitution.

In this way, Duarte visually encapsulates and analyzes the vivid picture Dr. King painted with his now-famous words and captures a snapshot of the civil rights leader’s oratorical brilliance.

Walk with Duarte through the “I Have a Dream” speech. It’s absolutely fascinating.

Here is MLK’s entire speech from 1963. It still gives the listener chills, half a century later.

This article was first published on Bilerico.