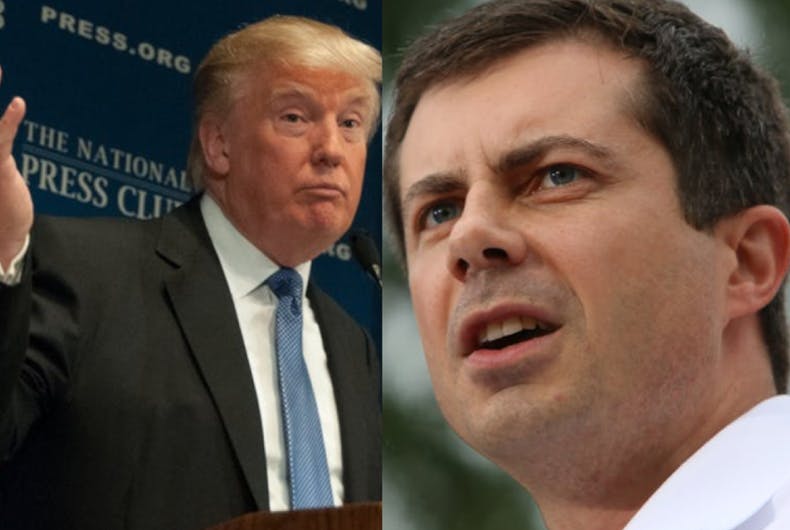 President Donald Trump, a twice-divorced adulterer who has told thousands of lies while in office, denigrated out Democrat Pete Buttigieg for “trying to pretend” he’s a Christian. But Buttigieg shot back with a devastating reply that skewered the President with only 12 words.

The comments came as Trump spoke in front of a gathering of conservative evangelical Christians. The far-right has frequently questioned Buttigieg’s faith because he is a married gay man.

Buttigieg, an Episcopalian, frequently mentions his faith on the campaign trail and has made it part of the bedrock of his campaign since the beginning.

“The extreme left is trying to replace religion with government and replace God with socialism,” Trump told his supporters. “And I see Alfred E. Neuman comes out and he’s trying to pretend he’s very religious. Alfred E. Neuman you know who that is, right?”

Neuman is a character from Mad Magazine that was popular in the 70s and 80s. Trump’s decidedly un-Christian insult of the candidate’s appearance was cheered by his supporters.

“Buttigieg—you go ‘boot’ and then ‘edge, edge,’ because nobody can pronounce his name so they call him ‘Mayor Pete’,” Trump continued. “Now Mayor Pete I hope he does great. Boot-edge-edge. Now all of a sudden he’s become extremely religious, this happened about two weeks ago.”

Mayor Pete was unfazed by the latest broadside from the perennial bully. In a tweet sent after Trump’s attack, the candidate simply responded with his oft-stated mantra that “God does not belong to a political party.”

But at a townhall in New Hampshire, Buttigieg was a little sharper – and wittier – with his response to Trump’s insinuation that as a gay man he can’t be religious.

“I’m not sure why the president’s taken an interest in my faith journey, but certainly I would be happy to discuss it with him,” Buttigieg told reporters after the event ended. “I just don’t know where that’s coming from, you know. Certainly, it has been a complex journey for me, as it is for a lot of people, but I’m pretty sure I’ve been a believer longer than he’s been a Republican.”

Pete responds to Trumps attack on his faith…just now on MSNBC.

"Pretty sure I've been a believer longer than he's been a Republican."

God does not belong to a political party.