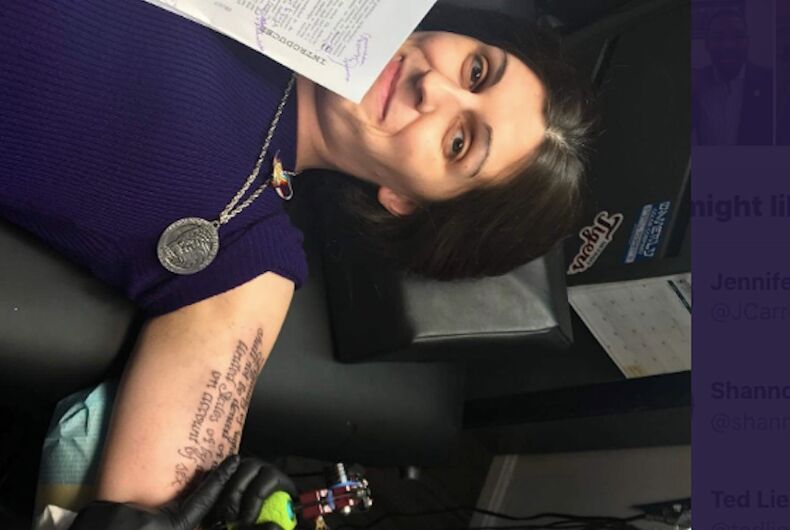 Transgender Virginia House Delegate Danica Roem (D) got the first 24 words of the Equal Rights Amendment tattooed on her left arm on January 14, 2020, a day before the Democratically-led Virginia legislature became the 38th to ratify the ERA — setting up a legal battle over its inclusion in the U.S. Constitution.

The cursive tattoo reads, “Equality of rights under the law shall not be denied or abridged by the United States or by any State on account of sex.” Roem, who co-sponsored the House resolution for ratification, said, “It is a values statement I’m proud to carry with me for the rest of my life.”

Roem had the tattoo done at the Body Gallery, a parlor in Sterling, Virginia. The parlor’s co-owner Mike Piwowarski said at least one customer every year asks for the ERA to be inked onto their bodies, though the parlor has never had a politician request it.

Roem reportedly marked up a 26-page legislative bill with her right hand as the tattoo artist worked on her left arm for two hours.

Here is Roem’s tweet showing her getting the tattoo while marking up legislation:

Seeing as the 38-state ratification for the ERA was supposed to occur by its original 1982 deadline, the fate of the proposed amendment remains uncertain. Although Congress could simply eliminate the deadline, that’s unlikely to occur with Republicans leading the Senate.

On January 6, the Department of Justice’s Office of Legal Counsel posted an opinion stating, “The ERA Resolution has expired and is no longer pending before the States.”

Three states — Alabama, Louisiana, and South Dakota — have filed lawsuits to prevent the ERA from being added to the Constitution. Meanwhile, Illinois, Virginia, and Nevada have also filed lawsuits pushing the federal government to adopt it.

The New York Times’ Maggie Astor explained, “For women, [the ERA] would bolster pay equity, domestic violence laws, and pregnancy discrimination protections, among many other things. It could also affect men, such as by guaranteeing paid paternity leave equal to maternity leave.”

The amendment could also help ease civil legal battles over transgender rights and gender expression in the workplace, schools, healthcare, and public accommodations.

Franklin Graham got banned from another arena for his hate speech. Now he wants to sue.