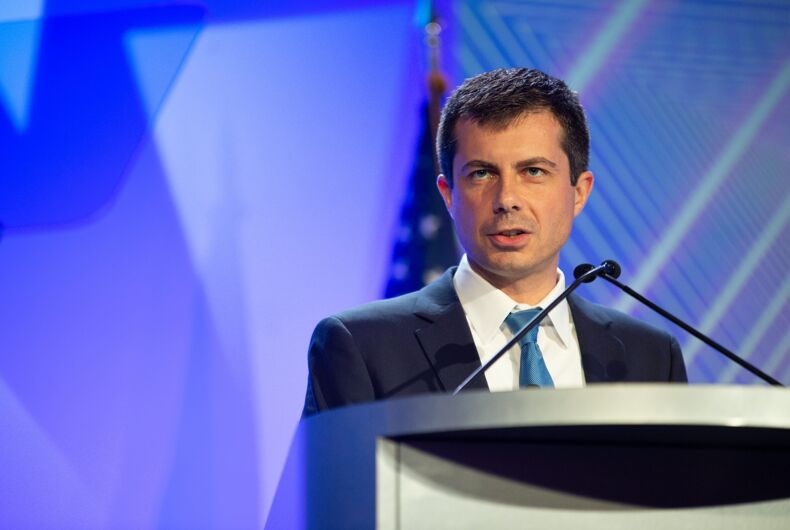 In recent weeks, former South Bend Mayor Pete Buttigieg has campaigned tirelessly to improve his polling with Black and Hispanic voters, as he tries to establish himself as the front runner in the Democratic primary.

A New York Times report describes the taxing effects of Buttigieg’s efforts – on his own campaign staff.

Over the last few months, people of color on staff at Pete for America have expressed their frustration of not having their grievances heard by senior leadership or their white peers. They are also frustrated with their efforts to improve Buttigieg’s image being ignored or “feeling disrespected” by senior leadership.

Since May, at least three campaign-wide “retreats” and meetings have taken place, solely focused on diversity and inclusion. The Times report names at least five local or staff-led meetings on the topic that have happened or will happen in the next few weeks. Senior leadership “was aware” but did not partake in the staff-led meetings.

Buttigieg advisers claim that these meetings and retreats are “part of an ongoing effort to foster a progressive culture that empowered employees of color,” but most have ended up becoming spaces for lower-end campaign staff to address their issues with the campaign.

Recordings, internal documents, and recollections of points in the campaign by current and former staff members of color described what it was like for them. Many of the people interviewed in the report spoke anonymously due to “nondisclosure agreements or fear of retribution.”

Reporter Reid J. Epstein writes that for Pete for America staff of color, “the workplace itself was a problem, and working for a candidate with so little support from Black and Hispanic voters had become demoralizing.”

At least one of the organized diversity and inclusion events became “emotional” because many employees “believed that senior Buttigieg officials didn’t listen to their concerns and ideas about the campaign.” Examples they include are Hispanic staffers being asked to translate to Spanish, even if they don’t speak the language, Black staffers trying to meet goals, and grievances related to diversity.

Specific points of stress on Black and Hispanic staffers have included a The Root article by Michael Harriot that called Buttigieg a “Lying MF,” which lowered morale within the campaign. Harriot wrote the essay in response to a 2011 video surfacing in which the presidential candidate claimed lower-income children suffer from not having people in their lives who can “personally testify… on the value of education.”

Another was senior campaign staff’s decision to try to continue hosting a fundraiser by Steve Patton, a former attorney for Chicago Mayor Rahm Emanuel, against the advice of both staffers of color and public relations advisers. Patton is known for trying to block video evidence in the investigation of the death of Laquan McDonald from being released.

Buttigieg was criticized heavily for proceeding with his fundraiser anyway, and “at the last minute, amid an outcry,” removed Patton as a co-host and returned his donation. A campaign spokesman claimed this was a “communication breakdown,” not an explicit bypassing of the campaign’s vetting process.

On the campaign’s “difficulty of hiring minority candidates,” employees reported that the retention of employees of marginalized identities is low, namely because the campaign is struggling to respect the concerns of minority staffers and needs to “meet a higher bar internally” on issues they’re also fighting to address on the campaign trail.

In response to these concerns, the campaign published “Behind the Rules of the Road: Belonging” – which spoke about the senior staff’s diversity quotas, including having 40% people of color on staff – and what steps they are taking to help staff “belong” better. The title of this article also inspired the name of follow-up sessions on the diversity retreats that was held near the campaign’s headquarters in South Bend, called “Building Belonging.”

Black and Hispanic staff took matters into their own hands. They created bridge groups between the majority white staff and other marginalized groups. They have even sent out a survey for employees of marginalized identities only, asking them to identify  microaggressions they experienced.

Two veteran presidential campaign advisers are quoted in the report as describing the situation within Buttigieg’s campaign as unusual, especially “so close to the start of voting,” according to Donna Brazile.

In response to the Times report, Buttigieg issued a statement saying that he and his team are “proud of the staffers that stood up” and promised they will “continue to provide our staff the safe space” to speak on the campaign. Buttigieg believes the story shows his campaign’s “commitment to diversity, and its openness.”