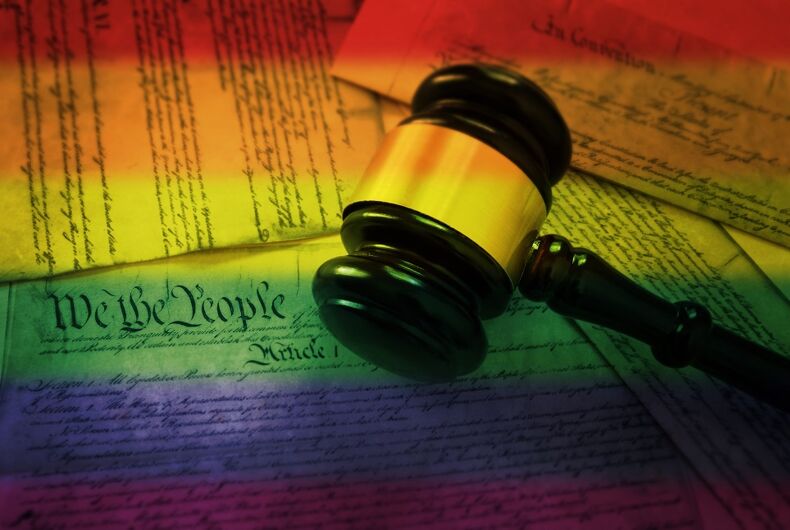 A pair of recent decisions from two of the southern federal Circuit Courts of Appeals should be alarming us all.  Instead, they’re only alarming a handful of us – because, overall, our community still clings to the inexplicable belief that religion can be our friend or, at least, a friend that we will be able to use to defend ourselves from certain others who also claim religion to be their friend.

Of the two recent decisions, only one has a direct LGBTQ component. Even so, it is truly difficult to say which one is the more disturbing, though the non-LGBTQ one, United States v. Brown, probably deserves the nod.

Related: Trump & Supreme Court are continuing their ‘war’ by trying to recapture the schools

The Brown in question is Corrine, a former member of Congress from Florida, convicted on a slew of counts, the specifics of which are strangely irrelevant for purposes of what makes one of the opinions in her case problematic.

What does matter is that she was convicted by a jury. On appeal she took issue with the trial court’s decision to not allow “Juror 13” to contribute to rendering a verdict.

Shortly after deliberations began, “Juror 8” informed the judge that “13” had said, “A Higher Being told me Corrine Brown was Not Guilty on all charges” and that he “trusted the Holy Ghost.”

Do those sound like the words of someone who is going to make a decision based on earthly evidence?

Now, not surprisingly, Brown’s defense team wanted “13” to remain on the jury. But the trial judge articulated a clear difference between someone praying “for guidance and so forth” and what “13” seemed to be saying. And, to his credit, he wondered aloud what the parties’ positions would be if “13” had instead said he “trusted in the Holy Ghost to find Ms. Brown guilty of all charges.”

Eventually “13” was asked directly: “Did you say the words, ‘A higher being told me that Corrine Brown was not guilty on all charges?’”

Also not surprisingly, the trial court determined there was “no substantial possibility” that “13” could render a verdict based solely on the evidence. “13” was excused, an alternate was seated and the jury convicted.

Somewhat surprisingly, two of the Eleventh Circuit judges agreed with the trial court.

But then there’s William Pryor, who George W. Bush plucked from the position of Alabama Attorney General for a position on the court (and who, in all fairness, once signed onto a very pro-trans opinion).

He began his Brown dissent by quoting the juror’s oath in full: “Every juror who was empaneled in Corrine Brown’s criminal trial swore this oath. One of them was dismissed because he apparently meant it,” referring to the “so help you God” part.

The words of “13” actually lay waste to that opening salvo of the Passion of Pryor’s Victimhood and the vomitous two dozen or so pages that follow, but the facts never get in the way of those attempting to merge government with their religion.

Recall the defamatory accusations that Sen. Dianne Feinstein (D-CA) possessed anti-Catholic “animus” for having the temerity to analyze a Trump appointee’s publicly-stated positions. “Dogma and law are two different things,” the senator stated. “And, I think whatever a religion is, it has its own dogma. The law is totally different. And I think in your case, professor, when you read your speeches, the conclusion one draws is that the dogma lives loudly within you.”

Bill Donohue, who does business as the Catholic League, claimed that was “awfully close to establishing a religious test.”

There is indeed a constitutional ban on religious tests for government positions.  But there is no ban on constitutional tests for whether a given person will adhere to the edict – hiding in plain sight within the Constitution’s text – that that Constitution, rather than any religion (or accompanying dogma), is the supreme law of the land.

This leads to the second of the two circuit court decisions, United States v. Varner, which does involve a trans person. But, much like Brown, the underlying specifics of her conviction aren’t all that relevant to why the appellate decision is disturbing.

Varner is an incarcerated trans woman who wanted her current proceeding to utilize her new name (secured via a state court order, albeit possibly under false pretenses) and female pronouns.

Courts are all over the place on requests such as this and the Varner dissent respectfully agreed with the lower court’s denial of part of the request and felt there was no problem with using female pronouns at the Fifth Circuit. In short: Not worthy of cheer, but also not of sneer.

But the majority? Authored by Trump appointee Stuart Kyle Duncan?

Whether he had a smug look on his face while authoring the opinion that gleefully deadnamed Varner and refused to consider even the possibility of female pronouns, one can only speculate.

“[N]o authority supports the proposition that we may require litigants, judges, court personnel, or anyone else to refer to gender-dysphoric litigants with pronouns matching their subjective gender identity,” Duncan wrote.

Keep in mind that the Fifth Circuit sits in New Orleans – in Louisiana, a state which recognized legal transition four years before Duncan was born.

He went on to intimate that recognizing transition would equate to judicial impartiality prejudicing parties other than the trans parties.

In doing so, Duncan went out of his way to misgender another litigant (a party in an entirely different case in a different Circuit Court – and from an opinion that had not misgendered the litigant) while opining that recognition of a trans person’s “deeply felt, inherent sense” of one’s gender “may unintentionally convey [the court’s] tacit approval of the litigant’s underlying legal position.”

Clearly, some people are entitled to their deeply held beliefs and some are not.

With that in mind, search through the briefs submitted to the U.S. Supreme Court in the Title VII cases for variants of the term “gender ideology.” You’ll find plenty – but they are all invoked against trans rights. If the science that backs up the legitimacy of trans existence is just ideology – you know, just a form of religion – then that should be entitled to protection.

What the LGBTQ community has never learned is that, when religion merges with government and science is reduced to having no more standing than faith, our religions and faiths and beliefs (or lack thereof) will never be recognized when they conflict with the particular religion and faith and belief of those who have seized power – legitimately or otherwise.

Once religion enters the government picture, everyone loses – at least everyone not sitting at the table of power.

Undoubtedly some LGBTQ people voted for Donald Trump out of the same sad avarice that has led both corporate and evangelical America to embrace a man who is financially incompetent and religiously illiterate but who can deliver unending hydra-headed torrents of hate-filled hypocrisies to the masses.

Some may have genuinely believed that he offered something concretely better than Hillary Clinton.

And some of those may have genuinely felt he’d protect their right to practice their faith and to be safe from government criminalization of their sexuality.

I’d like to think that three years of Trumpism has convinced them to choose another path this time around – but, sadly, I know that not all of the “Gays for Trump” signs are fake.

The notion that we will be in any way safe in a world influenced by a Trump-laden judiciary is wholly fake.

The Irish comedian Dave Allen was routinely characterized as being anti-religion. His response was that he was not attacking anyone’s personal beliefs (his sign-off was the genuine “may your God go with you”), but authoritarians who use religion to exert power to inflict pain. He was proud of holding a “grudge against all the evil things that are done in His name.”

Many evil things are done by certain humans who are no more conduits for divine authority than any other life forms.  Many prove on a daily basis that they should not be permitted to be conduits for governmental authority of any sort – much less ostensibly unbiased judicial authority – because they’ve chosen sides.

And the side they’ve chosen is not the government of corporeal law that they’ve sworn to uphold.

Pointing that out will never be animus toward religion or faith.

More of us need to be willing to recognize that – and to point accordingly.

Joe Rogan may cost Bernie Sanders more support than ever