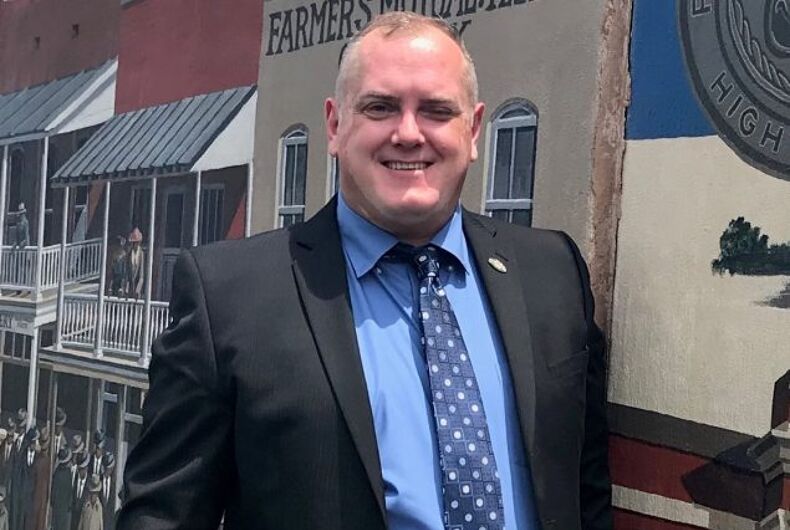 In what is arguably one of the most significant upcoming races in the nation, gay man Jimmy Ausbrooks has thrown his hat in the ring to become one of Kentucky’s U.S. Senators.

Ausbrooks faces quite a tough battle, though, as there are nine other Democrats who are all vying for the chance to face off against Senate Majority Leader Mitch McConnell (R).

Ausbrooks is certainly an underdog in this race, but running as an openly gay man is no small feat in a state that has a long way to go when it comes to LGBTQ equality.

While certain areas of Kentucky have passed their own civil rights ordinances, there are no state education, employment, or housing protections for LGBTQ residents.

Kentucky tends to make headlines for its anti-LGBTQ actions. For example, in 2017, the state senate passed a law protecting the religious freedom of students in public schools and has been interpreted as a way to allow student groups to discriminate against LGBTQ students. Kentucky residents seem to disagree about whether or not attitudes are improving.

Ausbrooks hopes his candidacy will help him be a role model to struggling LGBTQ youth.

“I think I’m giving a voice to many that have been basically muffled or silenced because of their identity,” he told LGBTQ Nation. “Growing up, I didn’t have any positive role model… I want to make sure LGBT youth growing up today can see that they are more than their surroundings, meaning their family, their school, that if they set their minds toward a goal they can accomplish it.”

According to Ausbrooks — who is a mental health counselor and currently the president of the Kentucky Association for LGBTQ issues in counseling — a lack of diversity in Kentucky is a big part of the state’s problem with establishing legal protections for the LGBTQ community.

“If you’re a little different,” he said, “then you’re not going to be as welcome, and that’s one of the things I want to change. If we can start educating people and bringing awareness, I think we can all get along and start to grow and develop.”

One reason Ausbrooks decided to run for U.S. Senate was his frustration with McConnell’s obstruction of the Equality Act. “The Equality Act should have already been put into place,” he said. “But McConnell refuses to address that, as well as hundreds of other bills that could literally change people’s lives.”

Women’s reproductive rights are also a huge priority for Ausbrooks, along with raising the minimum wage, healthcare for all, and student debt forgiveness. “I’m getting labeled as a progressive and that blows my mind,” he said. “That doing the right thing is so abnormal that you’re being labeled a progressive.”

Ausbrooks said he has grown tired of the lack of integrity and leadership in Washington. “I’m not doing it for fame or fortune. I’m doing it because it’s the right thing.”

He’s excited about how many people on both the Republican and Democratic sides of the race have decided to challenge McConnell. “We’re all going to bring strength to this,” he said.

The primary will take place on May 19, 2020. Right now, it is widely agreed that the Democratic frontrunner is Amy McGrath, a former Marine Corps fighter pilot who has garnered national attention. Other Democratic candidates include state Rep. Charles Booker and former Marine officer Mike Broihier. On the Republican side, McConnell has seven challengers, including former state Rep. C. Wesley Morgan.

Ausbrooks believes his experiences growing up in a lower middle class family help him connect to voters.

“I’ve got integrity,” he said. “I’ve got heart. I am a person that I feel can represent across the board. I know what it’s like living paycheck to paycheck. I know what it’s like having a mom making less than nine dollars an hour working at a factory forty hours a week, instead of retired because she can’t live on her social security.”

Before he became a mental health counselor, Ausbrooks spent twenty years working in sales and customer service. “Along those twenty years in public work I got to meet a lot of people,” he said. “I got to listen to a lot of individual stories, and that continued to grow an interest within me to become a professional counselor.”

“I have good rapport-building skills. I’m able to listen and not judge. I’m able to collaborate in helping other people see the direction that would probably be more beneficial, and I think those skills will be extremely beneficial on the Senate floor.”