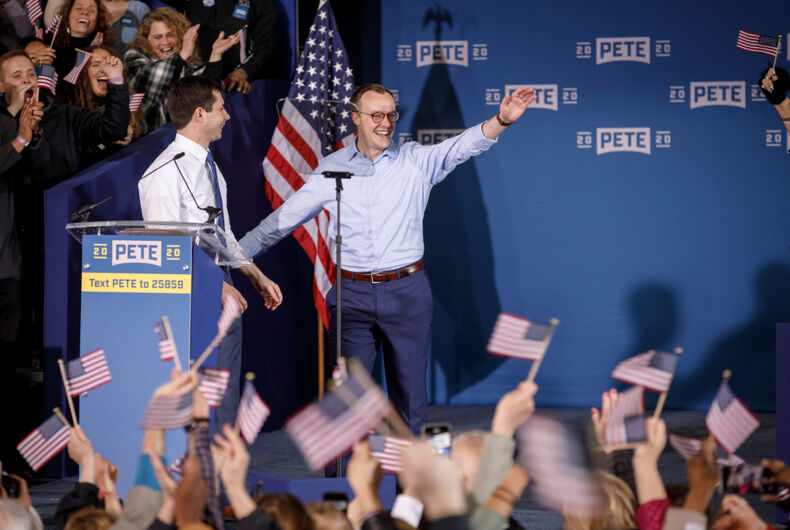 A Rhode Island bar is asserting that a scheduled fundraiser for Pete Buttigieg – which included an appearance by Pete’s husband, Chasten – had to be cancelled because Buttigieg’s staff wanted to remove the “dancer poles” because they were “inappropriate.”

The Dark Lady is a LGBTQ bar located in the heart of Downtown Providence that often features drag shows and exotic pole dancers. The venue has had “what seems like a 2-story dancer pole” as long as it has been opened. They usually have their ‘Fly Fridays’ weekly drag show to open the weekend, which consists of “a fun night of dancing and drag.” Their most recent Friday event, however, did not end that way.

The bar was anticipating to host a Buttigieg campaign fundraiser on Friday, January 17, which was supposed to directly follow a campaign event at the nearby Hotel Providence. When campaign staff arrived prior to the event’s start, they asked the owner and general manager, Buck Aspirino, to remove the pole. When Aspirino refused to, the event was called off, and Buttigieg’s staff redirected people back to the Hotel, 20 minutes before the start of the event.

“They asked us to remove the dancer pole, which has been here since we’ve opened…and it’s not going anywhere,” Aspirino told WPRI TV. “We were shocked because we had sent pictures of the club…they knew exactly what the place looked like.”

The event at The Dark Lady was open to the public, but Chasten’s trip to the Ocean State also unofficially showed appreciation to the several Rhode Island politicians that have endorsed or expressed support for the out Presidential candidate, including Providence mayor Jorge Elorza and City Council President Sabina Matos. Pete himself visited in November, but his events were closed to the press and public.

Now, the potential future First Gentlemen is under fire, just over three months before Rhode Island’s primary election, and just under a month before nearby New Hampshire’s.

After its cancellation, Aspirino immediately took to The Dark Lady’s Facebook page. The post includes a photo of the Dark Lady staff and reads in part, “Pete Buttigieg’s husband just canceled his appearance / fundraiser tonight at the Dark Lady because the ‘gay bar has a dancer pole!’…We guess this is what the gay candidate does to the gay community!”

Buttigieg’s campaign didn’t confirm or deny Aspirino’s version of events. In a statement emailed to The Providence Journal, Buttigieg Deputy Press Secretary Tess Whittlesey wrote that “Pete and Chasten know first-hand how important it is for members of the LGBTQ+ community to have a safe space to gather and our campaign would never do anything to intentionally disrespect such a space.” Whittlesey included several other events that Pete and Chasten have successfully held throughout the campaign.

The Buttigieg’s definition of “disrespect” appears to differ from The Dark Lady’s. Their Facebook post concludes, “We’re open, we’re here, we’re queer, get over it!”

Aspirino also criticized the Buttigiegs further, telling WPRI that he was “disappointed” that they preferred a “straight venue” to a LGBTQ+ one. “To be an openly gay candidate for president, I would think they would want to show support for their own community,” he said.

“The dancer pole is part of who we are ─ if you want to dance on a pole, we’re the place to be.”