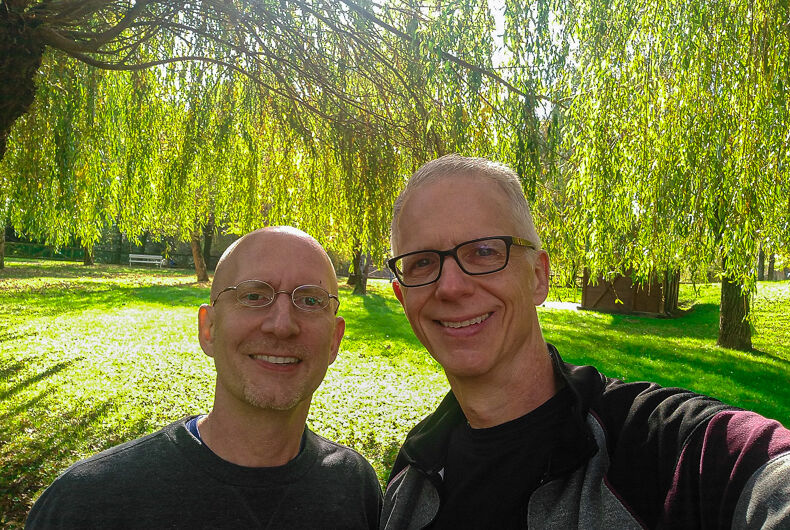 We’ve been a couple for 27 years, married for 23. But over the years, we had to get married five times. To each other, no less.

Let’s run through our different marriages, shall we? Because each one of those marriages reflected a step forward in the LGBTQ rights movement.

We met in 1992 and decided in 1996 to have a “commitment ceremony.” It’s hard to explain now, but back then it felt too weird to publicly call it a “marriage.” Two men being committed to each other was one thing, but the idea of two men being “married” was beyond the conception of even our most liberal friends.

But we believed, and still believe, it was important to be open and honest about our relationship, not just among our close friends, but to everyone who knew us, and to the world at large. So we gathered our friends and family together for the ceremony on an island off the coast of Seattle. Brent’s mom, raised a conservative Catholic, had an unsettling smile plastered on her face the whole time, and he was a little worried she might throw up in the middle of the ceremony.

But she didn’t, and the two of us were officially a couple. We even went on a honeymoon to Ireland, even if we didn’t really call it a “honeymoon.” Back then, that felt too weird too.

And here’s the thing: the marriage wasn’t official. It wasn’t recorded or recognized anywhere. It was just something we had chosen to do in front of our friends and family. (And we were extremely glad we did. We were overwhelmed by the love and support we felt from everyone except for Brent’s mother.)

A few years later, in 1999, we had moved to Los Angeles. We were really poor, and Bally’s Fitness snottily refused to give us the cheaper “family” membership without some sort of official certificate proving we really were a couple. So we drove over to West Hollywood, which had become one of the first places in the country to offer something called a “domestic partnership.”

We signed some paperwork, and the lovely people at the West Hollywood town hall threw confetti and served champagne, toasting our new marriage. Because we’d been given the incorrect closing time on the phone, a whole group of folks even stayed an entire hour after their workday to get the certificate done and celebrate with us. On a Friday night!

But this second marriage wasn’t legally recognized anywhere either. Literally the only benefit was getting that family membership at the gym. At that point, we were so pissed at Bally’s that we didn’t even bother going back. Instead, we went to the YMCA, and they didn’t even ask to see any documentation about our marriage. And no YMCA in any city since then has ever flinched at offering us a family membership.

Suck on that, Bally’s.

In 2009, back in Seattle again, Washington State announced it would offer “civil unions” to its LGBTQ residents. Apart from a few minor state recognitions, this too had no real benefits, but local activists saw this as a way to increase visibility and eventually expand our rights, and we agreed, so we signed up for that too. We sent in the paperwork and received a fancy certificate back in the mail.

In 2011, when same-sex marriage finally became legal in the state, we were automatically upgraded to spouses. This was a little weird because we got a letter from the state government saying that if they didn’t hear from us by a certain date, we’d be married. Surprise!

But even this marriage only recognized state married benefits, of which there weren’t nearly as many as there are federal ones. This too was more about the promise of future rights.

That said, there was clearly a feeling of change in the air regarding LGBTQ people and our relationships, and we were totally on board. State and federal politicians were finally listening to us, and taking our concerns very seriously. Things were improving radically and dramatically.

And sure enough, in 2015, the Supreme Court of the United States declared, in a narrow five-to-four victory, that marriage was a fundamental right to be recognized throughout the land. Once again, the two of us had to fill out some additional paperback, and then we celebrated with some friends. After twenty-one years together, we were truly officially married.

We disagree slightly on the meaning of this fifth marriage.

For Brent, it was just a formality — mere words on a piece of paper. The way he sees it, we always had the right to marry: it’s guaranteed to us in the Declaration of Independence and the U.S. Constitution. From Brent’s point of view, all that happened in 2015 was that our country finally recognized our existing rights and the first marriage that took place back in 1996.

Michael agreed with this, but still thought it was worth celebrating because it was a hard-fought legal victory and an important acknowledgment of our relationship by the government.

Either way, for the first three decades of our relationship, we’ve literally lived the history of gay rights in America. Until just the last few years, it seemed to us literally unimaginable that things could change so much so fast.

(We agree with those who say there is still more work to be done on LGBTQ issues, and we’re terrified about the trajectory of things under this current administration. But we flat-out disagree with those who say the LGBTQ rights movement hasn’t made much progress. Three things are dramatically different now: we have a real voice, in the culture and in the political world; we have genuine, widespread allies; and so many more of us are no longer choosing to hide who we are.)

The two of us don’t live in America anymore. For the last two years, we’ve been “digital nomads,” working remotely and traveling the world. We’ve lived in a series of foreign countries: Malta, Italy, Bulgaria, Georgia, Thailand, Vietnam, and Switzerland, among others.

In all of these countries, even Switzerland, the LGBTQ rights movement is not where it is in America, which is very sobering. People are sometimes still fighting for basic protections and very simple recognitions. Either that or most LGBTQ people aren’t fighting at all, because social conditions are such that it’s not yet safe enough for the vast majority of the country’s LGBTQ citizens to come out. People remain in hiding.

But change is coming. It probably won’t come all at once, because that’s not how change ever happens. Still, we’ve seen signs of progress everywhere we’ve gone.

And here’s our hope and our prediction: now that change is happening, it will be faster in these places than it was in the United States. One thing we know because we’ve seen it firsthand: the world is extremely interconnected now, more than ever been before.

So who knows? If the LGBTQ people in these places ever want to get married, they may not have to do it five times before it finally takes.

The queer community lost two heroes you may not know. You should.

Strangers at Starbucks stepped in after brides’ wedding plans were ruined