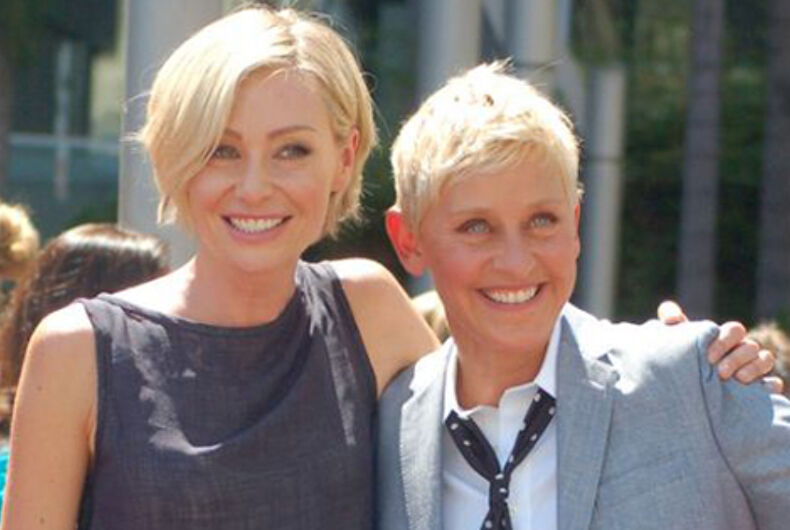 Portia de Rossi and Ellen DeGeneres at a ceremony for DeGeneres to receive a star on the Hollywood Walk of Fame.Photo: Angela George, CC 3.0

Ellen DeGeneres is on the cover of this week’s People and is getting personal about her eight year marriage to Portia de Rossi.

“Portia and I constantly say to each other, ‘We are so lucky.’ Sometimes it’s lying in bed at night before I go to sleep, and I just say thank you to whatever, whoever is out there,” she adds. “I’ve gotten to a place where I really am just settled. Really. I know that I’m not going anywhere. She’s not going anywhere. I’m not saying the relationship took a while; I’m saying in my life, it took a while to find this.”

DeGeneres and de Rossi have been together since 2004. It is DeGeneres’ third high profile relationship since coming out in 1997.

“Portia and I usually wake up around 6:30 or 7 a.m., drink coffee in bed and watch one of the morning shows,” DeGeneres says of their daily routine. “Then just reading, or she likes to do jigsaw puzzles. And we like walking about our property and hanging out with our dogs and just looking at the ocean. You know, relaxing.”

The couple also like to spend time at their estate north of L.A.

“That’s our sanctuary,” she tells the magazine. “When we’re there, we hike a lot and she has horses that she rides.”

DeGeneres and de Rossi also share their home with three dogs and three cats. She says they are still deeply in love after over a decade together as a pair.

She says there is no “best part” of marriage, but rather that “it is everything.”

“I can’t imagine not being married. I have my best friend, the person I want to spend time with more than anybody else in the world.”

DeGeneres and de Rossi have been the subject of tabloid stories suggesting their relationship was strained. DeGeneres told Howard Stern last year that they don’t pay much attention to them and joked that they are “now kind of flattered” to be a lesbian couple of such interest.