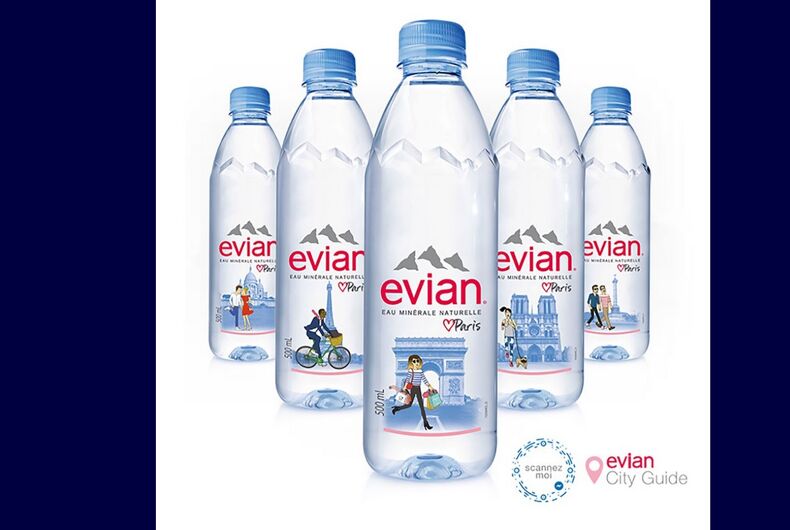 Evian, the brand of mineral water from the French Alps, isn’t taking any guff from people accusing them of putting gay “propaganda” on their bottles.

Last year, Evian released 12 bottle designs that show scenes from around Paris drawn by illustrator Tiffany Cooper. The art on the bottles include a woman carrying shopping bags in front of the Arc de Triomphe and a man biking in front of the Eiffel Tower.

And one of them shows two men holding hands at Place de la Bastille. So of course some people got upset.

At the time, Evian was accused of attempting to “destroy the traditional family” and there were even calls for a boycott, with people saying to buy Badoit and Salvetat instead, even though both of these brands of mineral water are owned by the same corporation as Evian.

Since the bottles are still being sold, the criticism keeps coming.

Twitter user Ivar Ragnarsson tweeted a short video last week with the gay Evian bottle, informing his followers that he didn’t notice that the bottle had “two guys who are holding hands” on it before he bought it.

“The propaganda they force on us is too much,” Ragnarsson captioned his tweet. In another tweet, he threw away the bottle and called it “bulls**t.”

Evian apparently saw the tweets, and they had a simple response:

Many of the responses to Evian’s tweet were supportive, but some of them continued to complain about the bottle, saying that homosexuality has nothing to do with bottled water.

None of these people, though, complained about the straight couples that appeared on other Evian bottles.