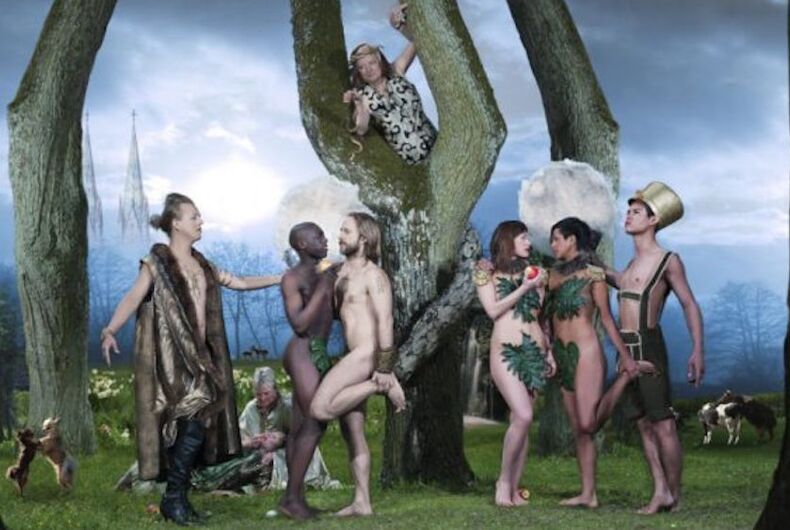 St. Paul Lutheran Church of Malmö, Sweden has removed Paradise, a queer work of art by photographer Elisabeth Ohlson Wallin that showed a gay couple and a lesbian couple in the Garden of Eden from its place above the altar in its main sanctuary.

But church leaders say they weren’t upset at the same-sex couples – they were more worried that its depiction of Satan as a transgender woman is offensive.

Wallin, whose work often includes same-sex couples and trans women, donated the piece and the church displayed it on December 1. In the tableau, two Adams seduce one another next to the Tree of Knowledge and two Eves do the same on the other side of the tree. In the tree’s branches, a trans woman dangles a plastic snake.

In a statement, the diocese wrote:

The fact that there are two homosexual couples in the artwork is completely uncontroversial. But the fact that there is a snake, which traditionally symbolizes evil, and that it turns into a transperson could lead to the interpretation that a trans person is evil or the devil. The Swedish Church can absolutely not stand for that.

Johan Tyrberg, the diocese’s bishop, said that the church should have gone through a formal approval process before deciding where to hang the art. Now, the diocese has commanded the church to move it to a different location, though it’s unclear where it’ll be moved.

St. Paul pastor Sofia Tunebro and the artist herself were both disappointed by the decision.

“We’ve been marrying gay couples for 10 years,” Tunebro said, “and with this artwork, it was a bit like hanging up a wedding photo in the church.”

Wallin told Queerty, “I think they blamed the snake as the reason to take the altarpiece down. I think they don’t want LGBT pictures inside the holy church room. Sweden, like a lot of other countries in the world, has a lot of strong, right-wing opinions about art.”

She says she’s working on a replacement piece for the church that excludes the snake.