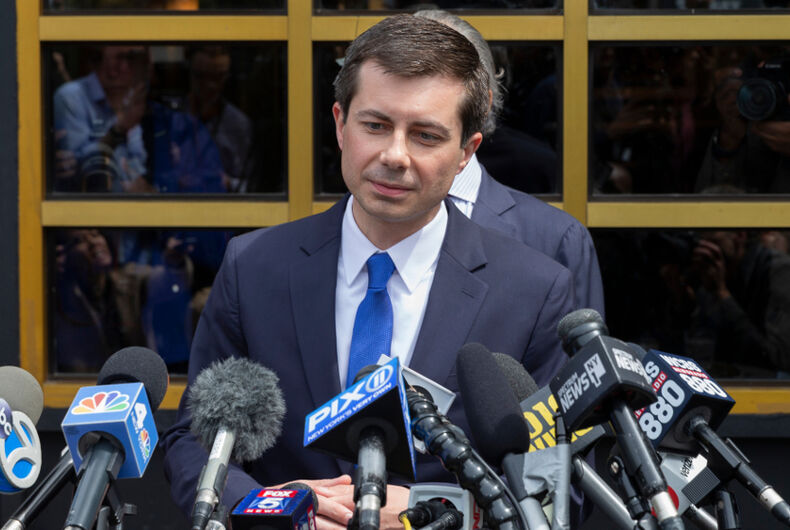 Former donors to Pete Buttigieg’s historic campaign are requesting refunds under the hashtag #RefundPete to show displeasure over his relationship with big-money donors at closed-door fundraisers and his past work with McKinsey, a global consultancy firm which has worked with authoritarian governments. Buttigieg worked for McKinsey from 2007 to 2010.

Previous to now, Buttigieg kept his fundraisers closed to the media and said he couldn’t comment on his specific work at McKinsey because of a non-disclosure agreement (NDA). But after criticism by fellow candidate Elizabeth Warren, Buttigieg has since opened future fundraisers to reporters and revealed some of his past McKinsey clients. Nevertheless, some donors remain unpleased.

Pro-tip: If @petebuttigieg fooled you into thinking he was a progressive at the beginning of his campaign and you donated what he thinks is pocket change, you can ask for a refund by emailing your receipt to [email protected] #RefundPete

Buttigieg’s rise in the polls has come with increasing criticism. Protestors demonstrated outside of his New York fundraiser this week chanting “Wall Street Pete.” Others have slammed him for attacking left-wing populist proposals like Medicare for All and universal tuition-free public college.

A recent viral video showed a teenager asking Buttigieg, “[Do] you think taking big money out of politics includes not taking money off of billionaires and closed-door fundraisers?” Buttigieg curtly replied “No,” and walked off.

While #RefundPete donors acknowledge their money is “pocket change” compared to the millions he has raised overall, they feel it makes an important point his lack of financial transparency thus far.

This past summer, upon reading about his excessive private jet use and seeing his response to Eric Logan’s death, I asked for a refund. I’m glad we are using our “pocket change” to send a message. Power in our collective rebuttal to his lack of transparency. #RefundPete pic.twitter.com/c44D8WWrZa

The honeymoon is over. As Mayor Pete comes under increased scrutiny, some don't like what they see and are asking his campaign to refund their contributions. #RefundPete has been trending. 👀https://t.co/V5iWPeLJsC

McKinsey has annual revenues of over $10 billion and a history of serving as a key advisor to authoritarian governments in China, Saudi Arabia, and Turkey. After leaving the firm, Buttigieg criticized the firm’s “poor choices” in recent years, including its “disgusting” work with Trump’s Immigration and Customs Enforcement (ICE).

“The bulk of my work on [McKinsey’s] teams consisted of doing mathematical analysis, conducting research, and preparing presentations,” Buttigieg said in a statement. “I never worked on a project inconsistent with my values, and if asked to do so, I would have left the firm rather than participate.”

In addition to allowing press at his fundraisers, Buttigieg has promised to disclose his “bundlers,” wealthy supporters whose donations are bundled with cash collected from many others.

Unlike Buttigieg, Warren and fellow candidate Bernie Sanders don’t do high-dollar fundraising and, as a result, have no bundlers. Even still, Buttigieg has still asked Warren to release tax returns from when she worked as a corporate attorney.