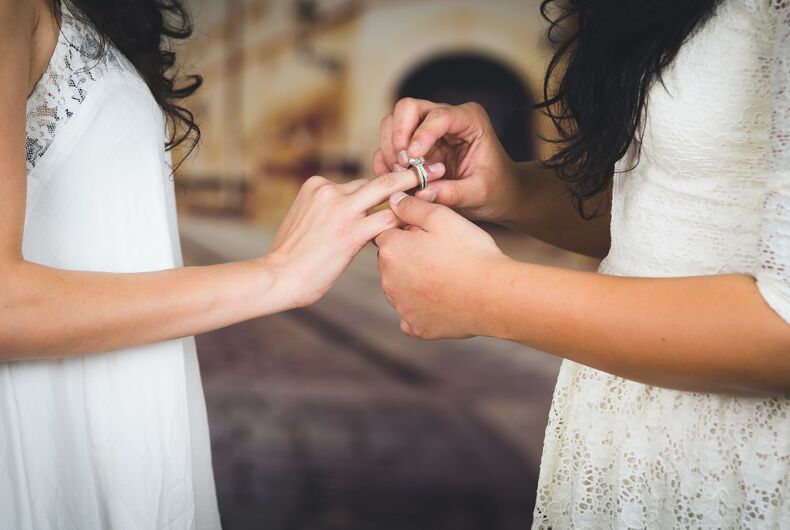 A lesbian couple from New York raised the bar on wedding rituals by performing a deadlift together at the ceremony.

Lisa Yang and Wek Hernandez got married last month at Prospect Park in Brooklyn. Since they’re both weightlifters, there was no better way for them to start pulling their own weight in the marriage than with a deadlift.

The couple – each wearing a white gown – lifted the weights and held them long enough to get a picture. Then they did the lift two more times.

They didn’t even break a sweat. The bar and weights weighed 253 pounds – about as much as they can each deadlift individually.

You can light a unity candle, pour sand in a glass, or do a deadlift. Huge advocate of doing your wedding your own way – Saturday w/ Wek and Lisa was stellar 💥💕. @tallandsmallevents @purslanecatering @empanadamn

“We thought about the usual candle lighting, tree planting, sand pouring, and none of those things represented Wek and I,” Yang told Women’s Health.

She said they joked about doing a deadlift… but the joke was that they don’t really focus on deadlifts usually. “But a snatch or clean-and-jerk in dresses might be a bit dangerous, so we settled on three deadlifts,” Yang explained.

“It was meant to not only be a symbol of unity but also a statement: ‘Individually, we are strong, capable women, but together we are stronger,'” Hernandez said.

She said that she thinks one of the bridesmaids in the photo looks shocked by their weightlifting, but she doesn’t care.

“I was just so happy and in the moment!” Hernandez said. “I mean, we were deadlifting in Prospect Park in wedding gowns professing our love. It was awesome!”

Amy Klobuchar tried to give an anti-LGBTQ Pentecostal group $500,000 in taxpayer funds