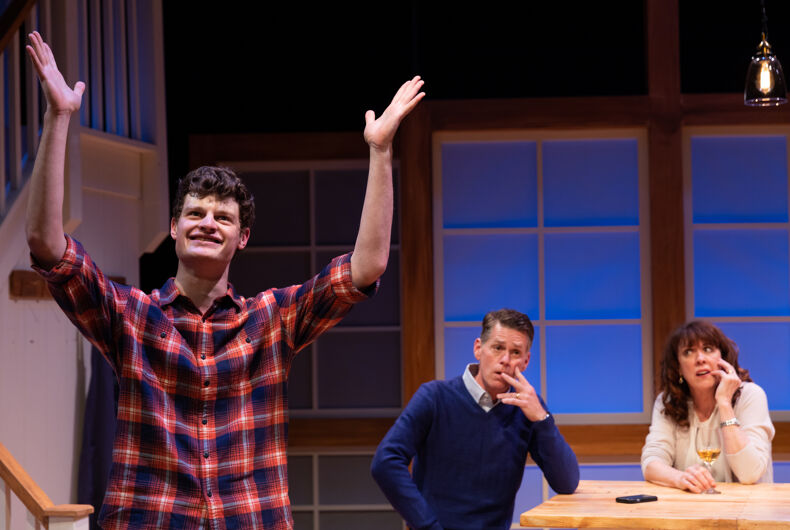 Sometimes the best way to look at oneself is through theater.

Joshua Harmon’s timely and satirical drama Admissions is one such production, and it’s now appearing here in Boston. The play is not about the college admissions scandal involving wealthy parents who cheated, bribed, lied, and laundered money to assure their children’s entry into elite schools – like former Desperate Housewives actress Felicity Huffman and Full House star Lori Loughlin.

While it is easy to dismiss this group of wealthy parents as depraved, morally bankrupt, and awash in white privilege, Harmon’s Admissions illustrates the length at which high-minded, politically correct, and supposedly “woke” white liberals will go to get their children into top-tier colleges and universities, too.

Charlie, a graduating senior at a tony New Hampshire boarding school, gets wait-listed for Yale, a school he has dreamt of attending since a small child. The news of being wait-listed flings Charlie into a temper tantrum that both shocks and appalls his progressive parents when his tirade turns into a racist rant. Charlie states he has better grades and SAT scores than his childhood best friend, Perry, who is biracial and who got accepted to Yale.

How the FUCK did Perry Peters get into Yale, and Charlie Mason gets deferred?… It’s so— I’m sorry, but it’s so unfair–I am drowning over here, ok? I am— Because I am not one of those. I get that there are entitled white men who assume they get a seat without having to do anything to earn it, but I’m actually one of the people working really fucking hard to earn a seat, and every time I get close, it’s like, ew! Not you! No one wants you here, fuck off.

While Charlie doesn’t grasp fully how white privilege works at unbalancing a level playing field and disrupting any chance at fairness, his father, Bill, the school’s headmaster, rails back at his son’s sense of entitlement:

Life is not fair. It’s miserably unfair, but it’s not little white boys in private schools in New England who have it so bad. Look at Fortune 500 CEOs. Look at Congress. Look at- White guys run everything. Why is that Charlie? Is it because white men are genetically predisposed to be geniuses?

Charlie’s parents are bleeding liberals who are not fully aware of how their white privilege, white power, white anxiety, and white guilt send mixed messages to their son. While Charlie’s dad runs the boarding school, his mother, Sherri, is the Head of Admissions. Both parents are dedicated to having diversity among its student body, until, that is, it impacts Charlie.

What parent doesn’t want the best for their kid?

The parents understand diversity more as a numbers game than as a systemic change that would bring real results. For example, Sherri admonishes a co-worker for having only three photos of students of color out of 52 in the admissions brochure. And Bill rejoices in a 20 percent increase in students of color compared to last year’s nine percent. Both don’t see that adding more students doesn’t change diversity, but instead, it cloaks the school’s status quo.

The pivotal moment in the play is Charlie’s solution to address his white privilege moving forward in life: to withdraw all his college acceptances, attend community college, and donate his college tuition to endow a scholarship for a student of color at the school. The parents are apoplectic with rage at the decision. They access their bevy of well-connected friends to overturn Charlie’s decision.

Harmon pushes white liberals to look at how easily they can “talk the talk”, but in reality, don’t want to “walk the walk.”

“‘The central arguments of the play revolve around thorny questions about access and opportunity. White liberal Americans want the world to look different and sound different, but do they really want things to be different?” Nathan Malin, who plays Charlie, told the Boston Globe. “The play asks the left to take a look at how committed you really are to this cause.”

There are no actors of color in the play — a wise choice. My spouse and I were the only two black people in the theater. Discussing the play going home we arrived at why: Admissions is a mirror liberal whites need to see for themselves and with themselves. It leaves whites progressives understanding that politically correct lip-service concerning diversity isn’t enough.

A man threatened to kill a woman at Planet Fitness. He got banned for life.