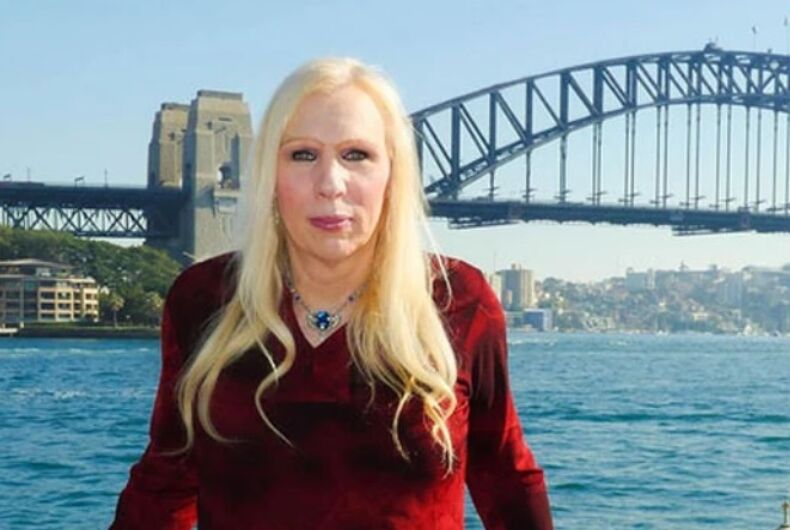 Since the days of Ferdinand Magellan, people have sought to sail around the world. Now, a trans woman is seeking to circumnavigate the globe non-stop, solo, and unaided.

“Sailing Solo Nonstop Around the World is probably the single most difficult task to achieve but if I can succeed I want for it to be a message to my community that anything is possible if you have a dream and are willing to work hard to achieve it, regardless of the cost personally and professionally,” said Lachlainn in a release on her Facebook page.

Lachlainn hopes that the World Speed Sailing Council will include her in the Women’s Category.

Said Lachlainn, “It would be a very humbling experience and honor to join such sailing legends and my heroes Kay Cottee, Jessica Watson, Ellen MacArthur, Isabelle Autissier, Naomi James, and Dee Caffari in the record books as having achieved such a difficult challenge as this.”

This wouldn’t be Lachlainn’s first time breaking new ground as a trans woman: she played in a women’s pro football league beginning in 2005 for the Detroit Predators of the Independent Women’s Football League (IWFL).

Her career in the IWFL would prove turbulent, as players and coaches from opposing teams hurled both verbal and physical abuse against Lachlainn. Her career would end after nine seasons due to a shattered tibia after a hit to her lower-right leg.

Lachlainn viewed the end of her football career as an opportunity to complete a childhood dream of sailing around the world, a dream that was revitalized while she watched both Jessica Watson and Abby Sunderland attempt to become the youngest make the journey.

“After my career ended in 2014 I knew it was now or never for me, that if I wanted my dream to come true I had to start laying out a road map to make that dream a reality,” said Lachlainn.

She is currently raising money through donation to field her journey.

Said Lachlainn, “In order to achieve my dream sponsors are absolutely critical to my success or failure as the costs associated with this endeavor are prohibitively expensive and sometimes beyond the reach of even the best sailors in the world.”

Those who wish to assist her trek can reach out to her via Team Revolution Sailing.

Caitlyn Jenner may be planning a comeback onto reality television