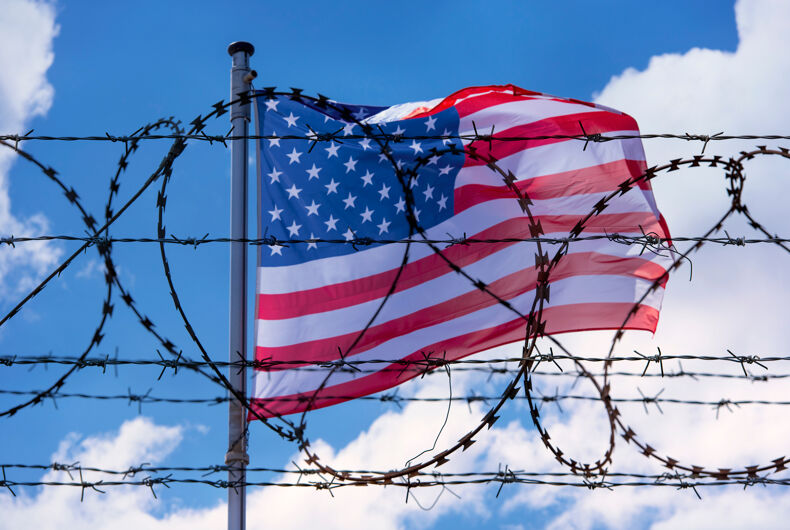 An American Flag in front of barbed wire at a US border.Photo: via Shutterstock.com

Under the Trump Administration, the Immigration and Customs Enforcement (ICE) agency has enjoyed the liberty to ignore rules and laws as they please, more than ever in its 16-year history.

In their latest blatant disregard for American legal procedure, it has been reported that the enforcement agency is detaining Darwin Garcia Portillo, a gay man who came to seek asylum from Honduras, without legal reasoning.

Out first reported on Portillo’s story earlier this week, after talking with Portillo’s “life partner”, Oscar Juarez Hernandez, and the Bobb family, their sponsors in Colorado.

Facing homophobia and threats of violence, Darwin Portillo and Oscar, 19, decided to flee for their safety along with Darwin’s 16 year old brother, who he was the sole caretaker of. Oscar reported that gangs had killed other gay and trans people in the area and had told LGBT people in the community, ‘Get out or we will kill you.’

As all asylum seekers need to be within the United States already to file their cases, the trio legally crossed the border of Mexico and California in March where ICE immediately took them into custody.

Following ICE’s known heartless procedure, the three were separated from one another and held in differing facilities across the country. While in custody, it’s reported that Darwin’s brother attempted suicide at least twice.

Eventually, Oscar was paroled by a judge and granted asylum in September. Margaret Bobb and her family in Colorado became sponsors for all three, assisting them in their legal proceedings and housing Oscar upon his release.

Yet Portillo, who meets all the same requirements for parole, has been kept detained and deemed a “flight risk” at ICE’s discretion. Based on that internal determination, Portillo was denied parole on Oct. 22, leaving him in a ICE facility in Louisiana where he remains today. The agency issued the denial in the form of a standardized blanket order, which is issued without a hearing or personal review of the case’s facts – in direct violation of a court ruling in September by Judge James E. Boasberg that banned orders without individualized hearings.

ICE claims to the Bobb family that for some reason, Portillo isn’t subject to that ruling. It was reported that at the time of that September ruling, ICE had managed to not parole any immigrants in its facilities for the entire calendar year.

David Bennion, Portillo’s lawyer as appointed by the Bobbs, claims that he believes his client is a target, both from inmates and from the system in Louisiana, as long as he is detained there. Bennion and the Bobbs believe that they are more likely to have Portillo’s claim accepted if he is free to present his case at a Denver federal court, and not imprisoned, forced to have his hearing in shackles in Louisiana – “It is terrifying to think that Darwin might have to come before a judge in Louisiana (a LGBTQ-hostile state), while wearing a prison jumpsuit,” Margaret Bobb told Out.

Bennion said in part, as reported by ABC News:

“This [being part of the LGBTQ community] is the basis of his asylum claim, but it also makes him vulnerable….Darwin, and other LGBT detainees, they can’t go to the bathroom by themselves; they have to take showers together to protect themselves, so they won’t get beaten or raped.”

“He’s been denied parole, with no justification,” said Bennion. “Clearly he’s not a flight risk. He has a very strong network of support, which is where he’ll go. He’ll join his life partner, who already has asylum.”

…According to ICE’s own parole directive, if an asylum seeker passes his credible fear interview, proves his identity, demonstrates he is not a danger to society and shows he is not a flight risk, he should be released on parole while he waits for his asylum hearing.

Garcia Portillo passed his credible fear test, has no criminal record, proved his identity and has the Bobb family willing to sponsor him, which is a strong indication that he is not a flight risk, according to his lawyer.

The family staged a protest on Wednesday outside the office of current Senator and Democratic candidate for President, Michael Bennet, in Denver.

As for Portillo’s younger brother, Customs and Border Protection (which is under the Department of Homeland Security with ICE) denied claims that he attempted to take his own life. Yet, on March 31 he was transferred to the custody of the Department of Health and Human Services. He was last known to be somewhere in Texas, but his exact whereabouts or state of well being are not immediately determinable, and HHS has refused to comment on the matter.

As for Darwin, his freedom and civil rights hinge on a video hearing this Thursday, November 7, with a judge on the other side of the country. “The judge will be located in Falls Church, Virginia, while [Darwin] Garcia Portillo and Bennion will be in Louisiana, and the court handling the case files will be in Minnesota,” the ABC News report reads.

“These agencies are in chaos,” said Bennion. “And it’s politically motivated to make it more confusing for immigrants, so they can be more easily deported.”

Mike Pence finds himself tied to the mast of the sinking S.S. Trump

Another Republican wants to ban gender-affirming medical treatment for youth