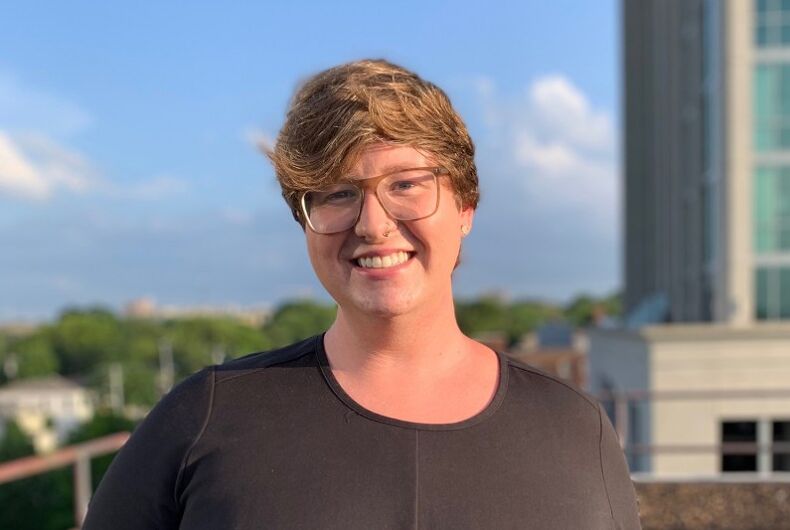 A 24-year-old woman named Hera Jay Brown has been announced as the first out trans woman ever to be named as a Rhodes Scholar during its 117-year history.

The Rhodes Scholarship is a prestigious post-graduate award that pays for two years of study at Oxford University in England. Rhodes Scholars can also get additional research grants and are generally regarded as some of the world’s foremost academics seeking to do good in the world.

Brown, who studies forced migration and asylum, was one of 100 scholarship recipients chosen from 2,900 applicants representing 60 countries. Two of the other recently announced Rhodes Scholars identify as gender non-binary.

LGBTQ Nation asked Brown what impact she hopes her research at Oxford will have on the current refugee crisis at the U.S. southern border or elsewhere. She said she hopes to study refugee issues in the Middle East and attend law school to eventually found a legal firm with lawyers who have extensive, graduate fieldwork in regions around the globe. These lawyers would provide culturally knowledgable courtroom advocates for asylum seekers — something that’s badly needed.

“In the U.S., unlike many other nations, asylum seekers are not given the right to legal representation,” Brown tells LGBTQ Nation. “What this means is that you have people, even 4- and 5-year-old children, defending themselves before immigration officials with only the support of a translator. If an asylum seeker is fortunate enough to get a pro-bono lawyer, that lawyer is really only a legal advocate.”

In a tweet celebrating her achievement, Jay wrote, “It’s Trans Awareness Month; I can’t imagine a better time to announce that I’m the first trans woman elected as a Rhodes Scholar. As our rights and experiences as women are under threat, this moment has given me pause to reflect on what an honor it is to pave this path.”

She added, “I also want to highlight that while I’m honored, the work of advancing Trans rights — most importantly for Black Trans Women — must remain front and center.” She encouraged supporters to donate to the Black Trans Travel Fund and Pay Black Trans Women, two funds that help protect black trans people.

It’s Trans Awareness Month; I can’t imagine a better time to announce that I’m the first trans woman elected as a Rhodes scholar. As our rights and experiences as women are under threat, this moment has given me pause to reflect on what an honor it is to pave this path.

Let me say, these bigots can try to troll me all they want, but at the end of the day, I see through all y’all’s gaslighting AND still look this good pic.twitter.com/dvIM7TWMMM

Brown said she came out to her family as trans in 2013 at age 17 and began studying forced migration and asylum after thinking of having her “loving, supportive family [and] a stable reality… yanked away in an instant.”

“I know what it’s like to lose a home,” Brown said. “I know what it’s like to be blocked from access to medical care and what it means to physically leave the place you’ve always known, and that’s become a rallying point for me to connect and learn with people who’re facing this and to look deeper into the kind of social structures that allow for people to be displaced.”

Brown says she hopes her being named as the program’s first trans female scholar will help remove roadblocks that other trans women face in academia.