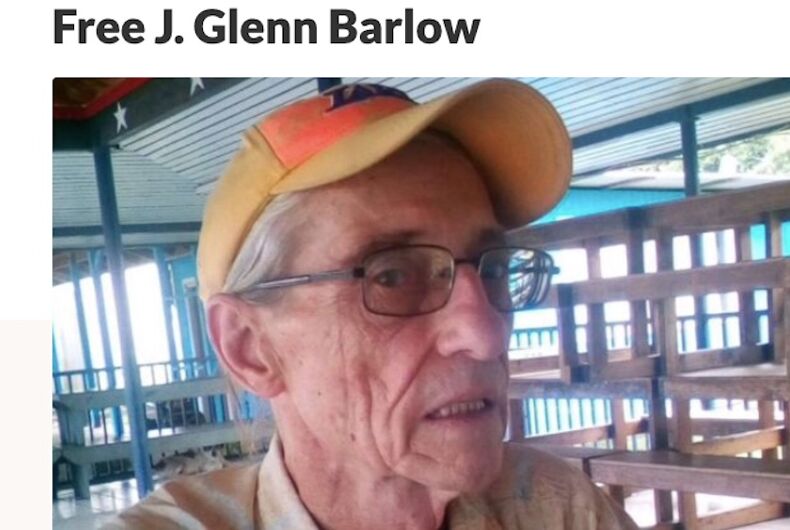 James Barlow, a 72-year-old gay U.S. citizen currently imprisoned in American Samoa, is battling with the U.S. territory’s High Court over a 24-year prison sentence allegedly spearheaded by “a fanatic prosecutor [with] a homophobic vendetta.”

While his case is unique (and disturbing), its recent development could pave the way to force the island territory to finally recognize the 2015 U.S. Supreme Court ruling legalizing same-sex marriage, a ruling that American Samoa has ignored.

In 2012, Barlow was jailed under felony charges of sexually engaging two underage teen boys after he and three boys were caught under the influence of alcohol in a car together. Court records show that the boys initially told their lawyers that no sexual interaction ever occurred between Barlow and them.

However, Barlow’s lawyer, Bentley Adams III, says American Samoan Assistant Attorney General Terrie J. Hartman Bullinger coerced confessions from the boys in closed-door interrogations in her office where she allegedly threatened to jail them for drinking alcohol and revoke their immigrant parents’ work visas unless they accused Barlow. During these unrecorded interviews, neither the boys’ parents nor their attorneys were present.

Barlow says that Bullinger was motivated by anti-gay animus because she “thought I had turned her son gay when he was age 19 and rented a room in my apartment.”

Adams says that prosecutors hid evidence of the witnesses’ past inconsistent statements during Barlow’s 2014 trial as well as “juvenile court dispositional agreements made between the government and the alleged victims.” The court also restricted Adams from cross-examining witnesses. This, along with the fact that Barlow was imprisoned for over two years while awaiting trial, all run afoul of the U.S. Constitution’s 6th amendment guarantee to due process and a fair, speedy trial.

Since being in prison, Barlow says he has been assaulted more than 17 times, causing the breakage of half of his teeth. One time, he was assaulted by a weapon-wielding convicted murderer causing a brain aneurysm, broken bones, damaged hearing and PTSD. Barlow also says the jails do not provide soap, toilet paper, or bedding and are filthy with broken plumbing, leaking roofs, rat and insect infestations, and pig slop served as food that causes food poisoning.

What does all this have to do with marriage equality?

American Samoa has been a U.S. territory since 1900. But unlike every other territory in he U.S., it has no federal court because it’s an “unorganized territory.” It’s also the only U.S. territory that refuses to obey the 2015 U.S. Supreme Court ruling legalizing same sex marriage, Obergefell v. Hodges.

Barlow appealed his 2014 conviction. Prior to the Trump Administration, the U.S. Department of the Interior (DOI) would send Federal judges to American Samoa to hear any appeals of the territory’s High Court convictions.

But when his appeal was heard in 2017, that process had been cancelled by the DOI, leaving Barlow’s appeal hearing in the hands of two Samoan high judges whose pending job promotions were being overseen by the High Court’s Chief Justice who had helped convict Barlow in the first place. Predictably, they denied his appeal.

Now that his local remedies have been exhausted, Barlow and his attorney filed for his case to be reviewed by a U.S. court. Normally, Barlow would’ve had to file suit against the U.S. Department of the Interior to get his case heard by a U.S. court. But by establishing commercial links between American Samoa and Hawaii — the nearest U.S. state where the American Samoan judicial system does most of its business — Barlow and his attorney argued that the Hawaiian court made sense as the nearest venue for a habeas corpus hearing (that is, a hearing that would explicitly lay out on what grounds Barlow had been charged, rather than concealing them as they believe the American Samoan court did).

A U.S. District Court in Hawaii recently granted them that hearing, basically asserting that the current system in American Samoa isn’t serving Barlow’s constitutional rights. This is a big deal seeing as in the past America Samoa has been able to ignore constitutional and federal laws at their discretion.

Adams told LGBTQ Nation, “American Samoa doesn’t follow the equal protection clause of the 14th amendment. They believe they can discriminate based on race. Unless you’re full-blooded Samoa, you cannot own land and it cannot be transferred. Job applications denote race and prefer Samoan applicants to those of other ethnicities. It has helped [American Samoa] retain their cultural identity better, unlike Hawaii which lost its land to white settlers.”

After the U.S. Supreme Court legalized marriage equality in 2015, the American Samoan government officials chose to ignore the ruling because of the territory’s heavily conservative Christian population. But Adams says the Hawaiian court’s recent habeas corpus ruling on Barlow’s case could mark the start of successfully challenging the U.S. territory’s disregard for same-sex marriage.

“The Barlow decision does strengthen the argument that the U.S. Constitution and laws have greater application to American Samoa than may have been previously believed,” Adams told LGBTQ Nation.

Before the question can truly be put to the test, someone in the U.S. territory would have to come forward and seek to obtain a license for a same-sex marriage and be willing to take the American Samoa Government to court if that license is denied, Adams says.

“I would anticipate that lawsuit would take the form of a civil rights action under 42 United States Code, Section 1983 which can be brought in the federal courts initially without the necessity of exhausting local remedies in the local courts there.”

“What happens in Barlow’s case will hopefully answer the question of which federal court would have jurisdiction of such a lawsuit,” Adams said.

Wendy Williams wants fans to know she’s not a lesbian: “I like men & I like the D”