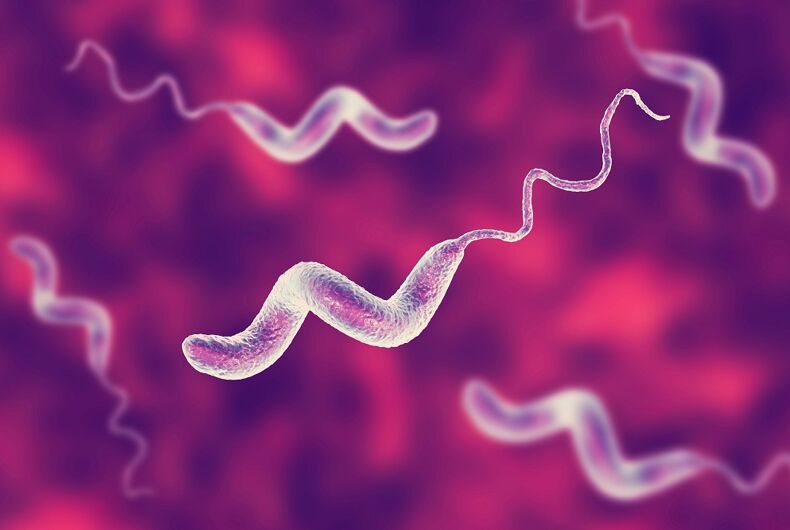 Research published in the journal Clinical Infectious Diseases shows a new and potentially disturbing finding: antibiotic resistant bacteria are showing up in stories of gay and bisexual men.

Originating in the intestines, the bacteria – called Campylobacter coli – has been showing up in men who have sex with men in both Seattle, Washington, and Montreal, Quebec. Via public health records, researchers located 400,000 reports of similar bacterial clusters from 2015 to 2018.

Campylobacter coli is one of the more common causes of diarrhea-related illnesses in the world. Symptoms of a Campylobacter coli infection include fevers, bloody diarrhea, and severe abdominal pain, and are commonly spread due to contaminated water and drinking raw milk.

The drug-resistance of this cluster of Campylobacter coli is a cause for concern. It seems to have gained its ability to resist antibiotics after the bacteria was infected a virus, after which fragments of DNA end up inserted back into the bacteria’s genome. In this instance, the gene for this specific drug resistance was introduced.

This research also indicates the need for more attention on sexual behavior as a possible cause of the spread of Campylobacter coli, expanding from looking at it as primarily a food-borne pathogen.

“The global emergence of multidrug-resistant enteric pathogens in MSM poses an urgent public health challenge that may require new approaches for surveillance and prevention,” said researchers in a new release published by Newsroom.

According to the Centers for Disease Control and Prevention, Campylobacter coli infections can affect up to 1.3 million Americans a year.