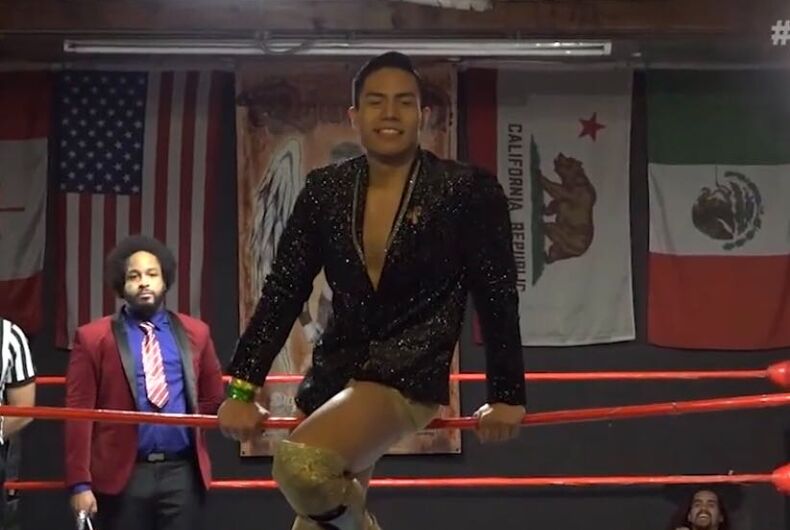 According to several reports, World Wrestling Entertainment (WWE) has approached champion wrestler Jake Atlas, who is gay, to officially sign onto their roster beginning in 2020.

In an exclusive story, Last Word on Pro Wrestling reported this week that sources saw Atlas in conversation with WWE officials following a wrestling competition in Los Angeles last month, and WWE executive and public face Triple H called to personally welcome him into the company. He is reportedly expected to report in January.

Atlas is a California native currently independent of any company, but he has been heavily sought of late by wrestling companies such as Ring of Honor (ROH) Wrestling. This is not his first time being linked to the WWE – in fact, he began serving as a brand ambassador in 2018 and had a tryout in December of that year. He appeared on the YouTube series WWE PC Tryouts.

Atlas’ sexuality first came to prominence when he appeared on an episode of Celebrity Undercover Boss and came out to Stephanie McMahon, the daughter of WWE owner Vince McMahon and wife of Triple H. Atlas is currently the holder of the Pacific Coast Wrestling (PCW) ULTRA Light Heavyweight title and All Pro Wrestling (APW) Universal Heavyweight belt.

While neither side has confirmed the reports, all signs point to it being an inevitable result of Atlas’ relationship with WWE and its executives, and his highly sought status.

The WWE is also reportedly struggling with ratings since its move to FOX and USA Network. This is partially due to the surge in popularity for its competitor All-Elite Wrestling (AEW) — which debuted on TNT this fall with the openly transgender wrestler, Nyla Rose, in addition to having gay wrestler Sonny Kiss.

According to Out, Atlas would be the second active gay male wrestler to run into the WWE’s ring, following Darren Young. While he’s far from the first wrestler that is gay to compete professionally, he appears to be the first gay wrestler the WWE has signed knowing of his sexuality.

Speaking to Outsports in a feature earlier this year, Atlas was prideful of who he is but also emphasized how hard he has worked to get to this point of his career. “I was the first one in the building and the last one to leave for two years…to have management believe in my story and background, allowing me to showcase my pride with the lifestyle I live, has been an incredible sense of relief.”

“I want us to get to a point where becoming a gay champion isn’t a headline, it becomes the norm,” says Atlas. “So any other LGBTQ kid that comes after us can see that nothing is holding them back from following their dreams.”

The L Word: Generation Q trailer only makes us more anxious for its return