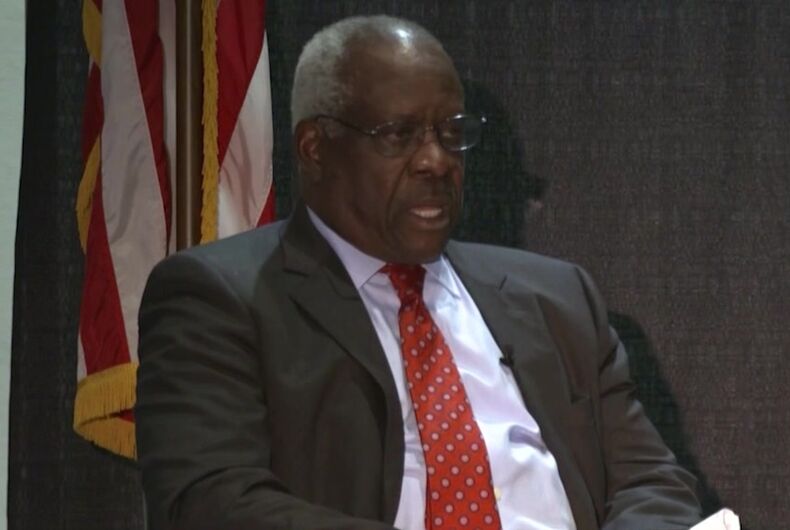 As the U.S. Supreme Court starts its new nine-month term, anti-LGBTQ conservative Justice Clarence Thomas has fallen ill and missed the first day’s proceedings — nevertheless, he’ll still help decide the cases before the court, even though he’s not around to hear their arguments.

A court spokesperson said Thomas likely has the flu, but his absence is particularly notable seeing as the court will hear cases tomorrow that’ll determine whether businesses can legally fire people for being LGBTQ. Thomas has been a vociferous opponent of LGBTQ rights.

However, the conservative argument that sex discrimination doesn’t mean discrimination against LGBTQ people, as the Trump administration has presented it, is that “sex” in federal law means “either male or female, unchangeable, and determined by the genitals that a person is born with.”

This argument misses the point, though: LGBTQ people face discrimination precisely because they don’t follow stereotypes associated with their sex assigned at birth.

It’s likely that Thomas will vote against LGBTQ rights, as he has many times since being appointed in 1991.

Most recently, he wrote a dissent against the 2015 Obergefell v. Hodges case which legalized same-sex marriage across the nation. He also wrote dissents in two landmark 2013 cases — Hollingsworth v. Perry which upheld a lower court ruling against California’s ballot measure banning same-sex marriage, Proposition 8; and Windsor v. U.S., Hollingsworth v. Perry which declared the so-called Defense of Marriage Act unconstitutional. Even as far back as 1996, he said states can legally pass anti-gay constitutional amendments in Romer v. Evans.

The Court’s ruling will apply any employee who doesn’t behave in accordance with perceived gender norms, whether they identify as heterosexual, cisgender or not.

The court is likely to issue their rulings sometime in June, which happens to be Pride month.