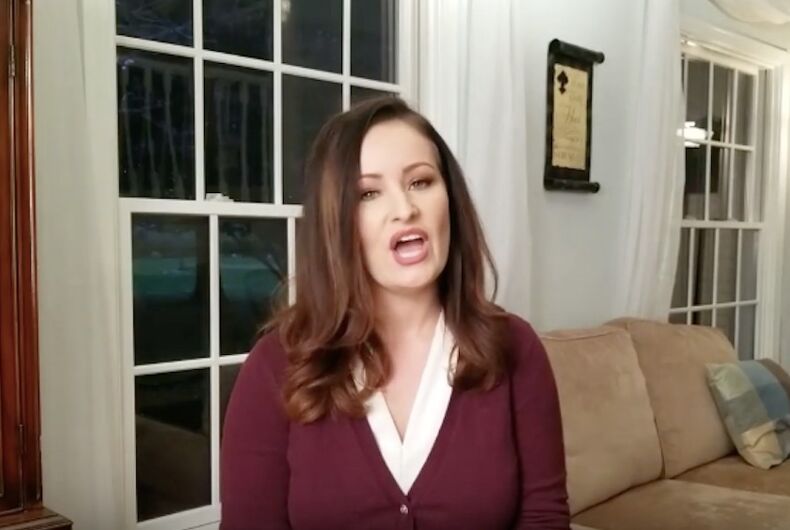 Savannah Maddox, a Republican representative in the Kentucky State Legislature, says she’s drafting legislation that would prevent parents from giving their trans children hormone blockers to delay the onset of puberty.

Her bill will endanger the lives of trans people and also be emulated in other conservative state legislatures, says Gillian Branstetter, a spokesperson for the National Center for Transgender Equality.

Maddox’s new legislation is in response to a Texas custody dispute involving two parents of a 7-year-old child. The mom says the child identifies as a girl named Luna, the dad says the mom is brainwashing their kid and forcing a female gender identity onto them.

The father has since started a conservative media blitz by talking to right-wing blogs about how his ex-wife wants to “chemically castrate” and “pump hormones” into their child (even though that’s not what happens to trans kids).

Yesterday, I began drafting a bill designed to protect children under the age of 18 from gender reassignment surgery or from receiving drug treatments designed to alter their natal gender. I am sure that many of you have read about the shocking case of this 7 yr old boy in Texas whose parents are in the midst of an ugly courtroom battle as a result of his mother’s desire to transition his gender from male to female, but truth be told this has been in my mind and on my heart for quite a while. I am a strong advocate for parent’s rights- but it is not the right of a parent to permanently alter a child’s gender or identity, even when based upon certain behaviors or the perceptions of a child’s mind which has not yet had time to fully develop.

As such, Maddox is just one of several politicians to insert themselves into the case: Texas Governor Greg Abbott, Texas Senator Ted Cruz, Texas Representatives Dan Crenshaw and Chip Roy and Kentucky Senator Rand Paul have all weighed in too, calling trans-affirming medical care potential “child abuse,” “barbaric,” “heartbreaking,” comparing it to “smoking and drinking” and calling the child “a pawn in a left-wing political agenda.”

However, young trans children aren’t “pumped” with hormones or “chemically castrated” — when they reach the age of puberty they’re given a single medication to delay its onset and prevent greater gender dysphoria. This medication is only administered after the child asserts their gender identity to a pediatrician and a therapist over the course of many years.

Branstetter tells LGBTQ Nation that Texas lawmakers are considering drafting similar legislation, and that such legislation endangers trans youth because it makes their parents far less likely to pursue mental and physical healthcare, something which increases a young trans person’s chances of mental illness and suicide.

Homophobia and homosexuality during World War I