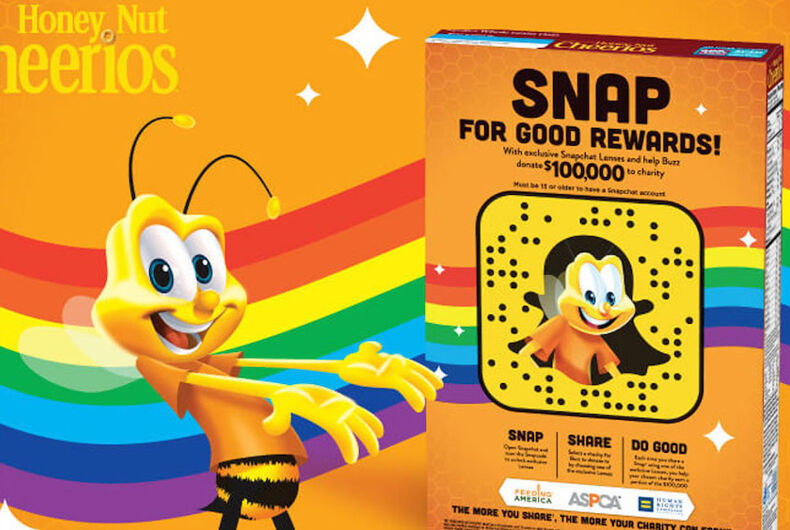 The Human Rights Campaign (HRC) Foundation has teamed up with Honey Nut Cheerios to help raise funds for LGBTQ equality.

The non-profit announced their new campaign with the cereal brand thanks to its parent company, General Mills. HRC will be one of three organizations participating in the cereal’s “Snap For Good Rewards” campaign with Snapchat which started this month and will run through Dec. 3.

On the back of Honey Nut Cheerios boxes will be a Snapcode that unlocks exclusive ‘lenses’ for taking pictures on the social media app. From there, users can choose between lenses from the HRC, Feeding America and The American Society for the Prevention of Cruelty to Animals (ASPCA). All three will also be receiving a portion of $100,000 from Honey Nut Cheerios based on the usage of the lenses — each snap taken will be worth one point.

“We are so thrilled to be a part of this significant, fun and interactive campaign alongside such great organizations,” said HRC Senior VP Chris Speron. “We’re grateful to General Mills and Honey Nut Cheerios for recognizing the importance of funding our work to achieve full equality for LGBTQ people.”

“…We hope this campaign spurs important conversations around breakfast tables across the country,” Speron continued.

Bzzzz! @HRC has partnered with Honey Nut @Cheerios for its Snap for Good Rewards campaign.

📱Unlock our Snapchat Lens on the back of your Honey Nut Cheerios box, post your Snaps using our Lens and help support the fight for LGBTQ equality. https://t.co/p4sepEHb0w pic.twitter.com/U0Ii9gvkhF

HRC noted that General Mills has consistently polled atop of its Corporate Equality Index (CEI), the “national benchmarking tool on corporate policies and practices pertinent to lesbian, gay, bisexual, transgender and queer employees.” General Mills earned a perfect score on the CEI this year and in 2018.

The Human Rights Campaign is the world’s “largest national lesbian, gay, bisexual, transgender and queer civil rights organization” with 3 million supporters. “HRC envisions a world where LGBTQ people are ensured of their basic equal rights, and can be open, honest and safe at home, at work and in the community,” according to their website.

Learn more about the Snap for Good Rewards campaign on Cheerios’ website.

Now through December 3, unlock HRC’s exclusive Snapchat Lens on the back of your Honey Nut Cheerios box, then snap and share your photos and videos to help support the fight for LGBTQ equality.