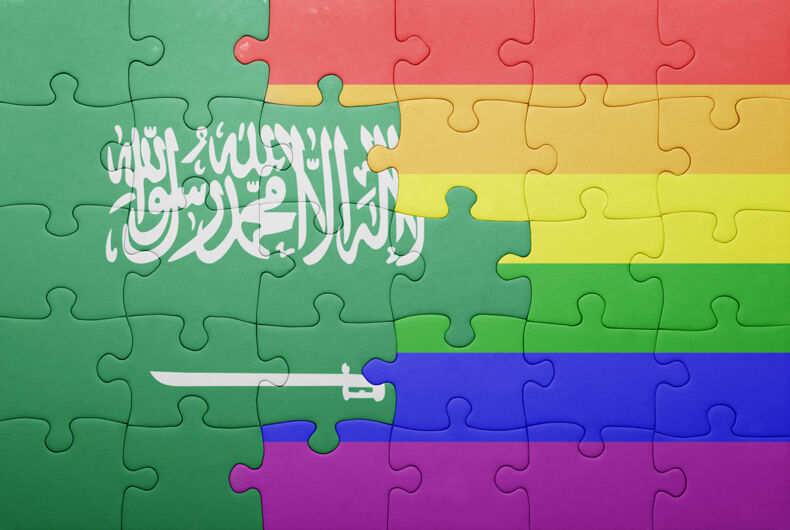 Corporate support for LGBTQ rights is a good thing. In fact, newly released research by by Shaun Pichler, chair and professor of management at Cal State Fullerton, finds that supportive companies tend to outperform their competitors over time. In short, being pro-LGBTQ is good for a corporation’s bottom line.

Yet, some companies have a lot of inducements to improve the bottom line, and some of those aren’t quite so pro-LGBTQ.

Consider the upcoming high-profile investment conference being held next week in Saudi Arabia. Dubbed “Davos in the Desert“, after the Swiss site of the World Economic Forum meetings, the event is a PR jewel for the Saudi Crown Prince, Mohammed bin Salman.

Last year,  pretty much everyone bailed on the event, with good reason. Jamal Khashoggi, a Washington Post columnist who was a critic of MBS, as the crown prince is commonly known, was murdered just weeks before the event inside the Saudi embassy in Turkey. The CIA concluded that the crown prince had ordered the brutal assassination, which involved cutting up his body in the embassy to dispose of it.

Khashoggi’s murder was widely denounced (except by the president, who took the crown prince’s side). However, it wasn’t an aberration. Anyone that the Saudi government perceives as a threat or a blot on the nation is subject to persecution and even execution — that includes LGBTQ people.

Saudi Arabia is one of a handful of nations that makes homosexuality an offense punishable by death. Earlier this year, the government beheaded five men “proven” to be gay. Men seeking other men on social media have been whipped and sent to prison.  Transgender people have been arrested and beaten to death. Proving that no offense is too small, a gay man was recently arrested for indecency for wearing a swimsuit.

You might think that such vicious oppression might give a few companies pause. To their credit, some media companies are still boycotting the upcoming economic summit. But financial companies — including companies that tout their support for LGBTQ rights — will be front and center.

Lured by the prospect of Saudi dollars, representatives from JP Morgan Chase, Citigroup and Goldman Sachs will be among the event’s attendees. JP Morgan Chase and Citigroup both have 100 percent scores from HRC’s Corporate Equality Index and are also among the 181 companies that have signed onto HRC’s Business Coalition for the Equality Act. Goldman Sachs similarly touts its commitment to “celebrating the LGBT community in the industry.”

Talking out of both sides of the mouth isn’t a new phenomenon for corporate America. But the Saudi event is a reminder that corporate support has its limits, and the limit is the bottom line.

As nice as it is to celebrate business support for LGBTQ rights, it’s a mistake to lean too heavily on it. Companies are focused on profits. When there’s an opportunity to make money, they will take it. (Indeed, their shareholders oblige them to.) And if that means hanging around with people who like to murder LGBTQ people and journalists, so be it.