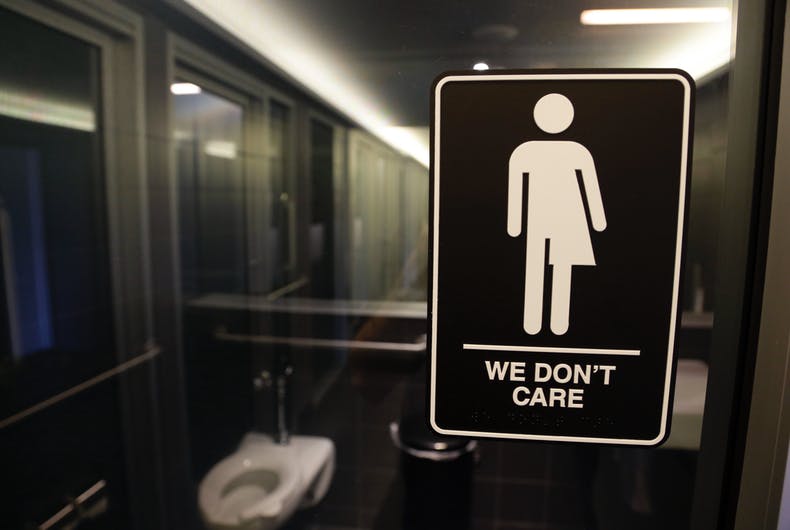 Students at a high school in North Carolina staged a walk out in protest of the school’s transgender-inclusive policies after rumors circulated about male teachers in the girls’ bathroom.

On Monday, students at North Buncombe High School near Asheville walked out of the school over rumors that the school’s trans-inclusive policy was being abused.

“I don’t feel safe going to school at all,” junior Sylvia Gardner told 13 WLOS. “I wanted to get out of school for this.”

She was referring to the school’s Gender Support Guidelines, which were adopted in 2017. The policy allows transgender students to use the bathroom that aligns with their gender, and that decision is made by administration on a case-by-case basis.

“All they have to do is pretty much say they identify as a girl if they want and just walk in there,” she said.

Of course, that’s not true. Buncombe County Schools Student Services Director David Thompson said that the guidelines create a process for the school to provide support for transgender students.

Part of the problem, though, has been rumors that are circulating about the policy. Some students said that a male teacher used the girls’ bathroom.

One parent said that the issue is fairness… for cisgender students.

“I agree they should feel safe, I agree whatever [atransgender student’s] choice, their family deserves the same kind of support as any other child in that school,” said parent Michele Dillingham.

“However, what I would like to see moving forward is seven pages supporting my non-transgender child,” she said, referring to the Gender Support Guidelines.

The students who walked out said they want a meeting with Superintendent Tony Baldwin.

Christians have been protesting a play in this town. So 2 men kissed in front of them.