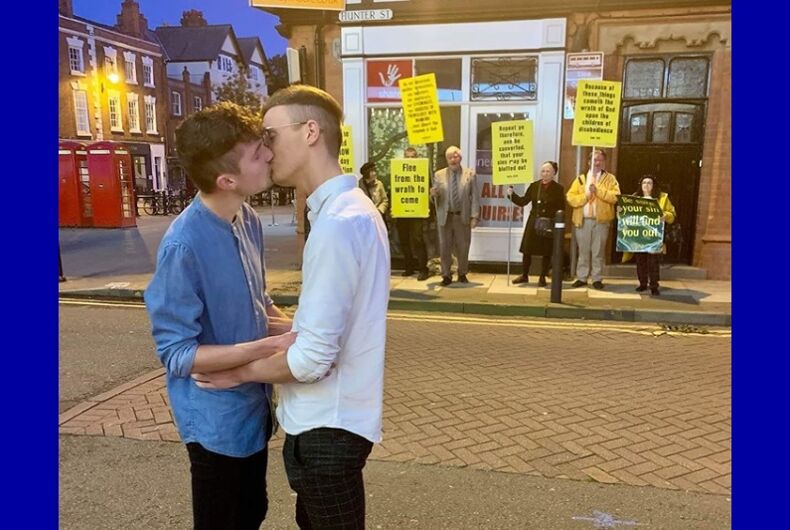 Religious protestors have been protesting a musical that they claim is “a corruption of public decency” because of its LGBTQ themes. But two men had the best response to the protestors: they kissed.

The classic musical Rocky Horror Show – the musical that was adapted into the cult classic film Rocky Horror Picture Show – is on stage at the Storyhouse theater in Chester, England.

But before the show even started, conservative Christians were protesting outside with signs that said, “Be sure your sin will find you out,” along with other messages about sin.

Members of the Zion Tabernacle Protestant Evangelical Church called the show “vile” and “unholy, sexual, and offensive to God.”

With the protestors! Apparently, according to them we’re all gonna die by Friday because we’re in the #rockyhorrorshow @rockyhorroruk 😂😂😂😂 pic.twitter.com/74zEZs1Eo6

The show has been touring the country and last month a pastor in another city wrote a letter complaining that it is “a corruption of public decency.”

Gay couple Joe Fergus and Robert Brookes went to see the musical and decided to respond to the protestors.

“When I saw the protesters, I saw lots of people arguing and shouting back at them,” Fergus told Cheshire Live.

“You’re never going to get rid of hate with hate so we decided to spread some love. One of the protesters actually said, ‘Oh that’s lovely. That’s lovely. You’re an abomination!'”

“I respect everyone is entitled to their opinion, however I am also entitled to kiss my boyfriend wherever I want without judgment, and that’s what we were fighting.”

Chester Pride, a local LGBTQ organization, posted a picture of the kiss on Facebook with the hashtag #SpreadLOVENotHate.

“Whilst we accept their right to protest, we do not accept their hateful message which goes against the valuable work we do all year round to improve LGBT+ acceptance in our society,” Chester Pride chair Warren Allmark said.