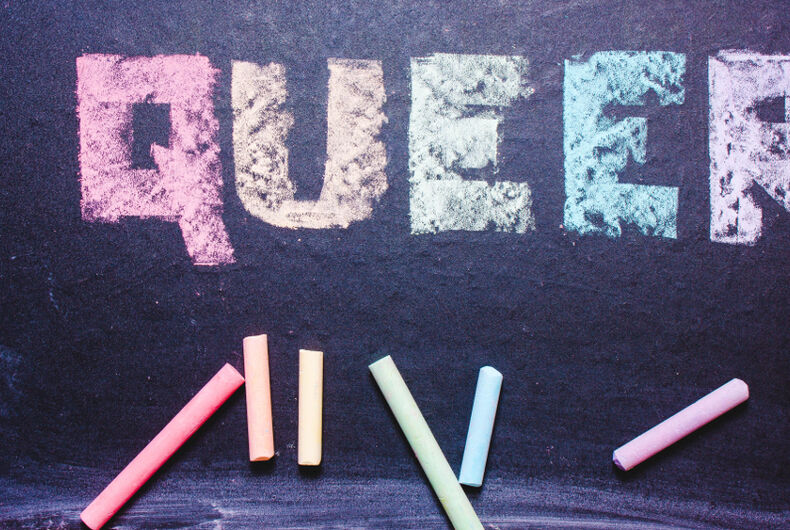 When people ask “What does the Q stand for in LGBTQ?” some people think its stands for “questioning” (as in someone who is questioning their own sexuality), but it actually stands for “queer,” a reclaimed anti-gay slur describing people whose sexual or gender identities aren’t just cisgender, heterosexual or otherwise “mainstream.”

But what is queer? What does queer mean? Is there a difference between queer versus gay? A queer definition is actually hard to provide because the word itself goes far beyond mere sexual orientation or gender identity. “Queer” itself has a rather queer definition. But let us clear it up so you can better understand the concept and how it applies to the entire LGBTQ spectrum.

What is queer? What does queer mean?

In the English language, “queer” originally popped up in the 16th century as a synonym for “strange” and “illegitimate.” In the 19th century, it began to mean “odd,” and by the end of that century people used it as a slur against effeminate men and men who slept with other men. In the 1980s, some gay and lesbian activists began reclaiming “queer” as an empowering self-designation.

Dictionary.com provides the following queer definition: “strange or odd from a conventional viewpoint, unusually different; of a questionable nature or character, suspicious or shady;” and finally, “a term used to refer to a person who is gay or lesbian.”

But the website’s last queer definition is probably the most accurate: “a person whose sexual orientation or gender identity falls outside the heterosexual mainstream or the gender binary.”

As such, all lesbian, gay, bisexual and transgender people fit this queer definition because their sexual orientation and/or gender identity falls outside of different-sex attraction and the traditional male-female binary.

But the Q in LGBTQ can also signify other sexual orientations and gender identities not covered by the acronym’s preceding letters. If you’re gender-neutral, non-binary, agender, genderfluid, pansexual, asexual, solosexual or something else not covered by LGBT, the Q has got you covered!

It’d be inaccurate to apply “queer” to any LGBT person you meet because some people still see “queer” as an offensive slur, or just don’t resonate with it as much as other terms.

Similarly, some people feel that “queer” erases their unique identities, lumping them all together in one category rather than proclaiming their unique sexual orientation and gender identity which might fall outside of the LGBT acronym: “I’m not ‘queer’—I’m ‘omnisexual!'”

And when it comes to queer versus gay, not all people agree that “queer” is the same as “gay.” For some, queerness refers to those whose identities, lived experiences and/or outlooks fall out of the mainstream as well as the protection of the mainstream.

This compels us to ask…

What does queer mean in the political sense?

A gay, cisgender, white, Christian, American man might describe himself as “gay,” but he and others might not consider him “queer” because his identities have increasingly become mainstream and afford him many social protections.

He benefits from white- and male-privilege and from having mainstream political and religious beliefs. Despite his gayness, his sexual orientation, gender identity, lived experiences and outlooks are common in modern-day America.

Compare this hypothetical gay man to a pansexual, trans, Middle Eastern immigrant living in the United States. This person’s unique combination of sexual orientation, gender identity, lived experiences and outlooks aren’t nearly as “mainstream” as the gay man’s, and they don’t provide nearly as much social protection.

In this way, “queer” can be seen as a counter-cultural identity: Queers who live openly are more vulnerable to intersecting social oppressions, like harassment by the police. But this queer definition can also set up an “Oppression Olympics” that focuses on who is the most queer, devaluing anyone seen as mainstream “insiders.”

What is queer theory?

In academic circles, queer theory applies to the political definition of queer (above) to question so-called traditional “norms” of sex, gender and desire.

Queer theory emerged in the early 1990s from feminist studies which questioned institutions and social practices that favor men and heterosexuals. As such, queer theory isn’t just about gender identity, sexuality or being LGBTQ. Rather, it focuses on intersecting identities and social power structures — like race, religion, class, disabilities, etc. — and how each one affects societal oppression and privilege.

Rather than accepting that everyone is either male-or-female, masculine or feminine, gay or straight, queer theory sees our sexual/gender identities and choices as “a fluid, fragmented, and dynamic collectivity of possible sexualities” that can change at different points in a person’s lifetime.

As such, queer theory doesn’t see identity as determined by genetics at birth, but rather “something that is constructed through repeated performative actions that are in turn informed by existing social [institutions and] constructions of gender.” For them queer isn’t a fixed identity so much as a critique of the very concept of identity and how it’s created and maintained.

What about Queer Eye for the Straight Guy and Queer as Folk?

Some people who ask “What is queer?” or “What does queer mean?” may have heard the word used in the reality makeover TV program “Queer Eye for the Straight Guy,” its more modern Netflix reboot “Queer Eye” or the British mini-series turned American Showtime series “Queer as Folk.”

The “queer” in “Queer Eye for the Straight Guy” refers to its five makeover specialists, the “Fab Five” each of whom identifies as gay. In each episode of the original 2003 to 2007 series, the Fab Five helped improve the grooming, fashion, living space, cooking and cultural abilities of heterosexual men, hence the “Straight Guy.” In the Netflix “Queer Eye” reboot, the Fab Five also work with women, trans and gay people.

“Queer as Folk” may sound strange, and that’s probably because the show’s name derives from an old expression from Northern England: “There’s nowt so queer as folk.” In modern English, this expression means, “There’s nothing as strange as people.”

Since “Queer as Folk” started in the U.K. and focused on the friendships and fights within a group of gay male friends (and some other LGBTQ side characters), the title suggested that its “strange” LGBTQ characters would make for good TV viewing.

Another queer definition (for straight people?)

The answer is “possibly.” Polyamory and kink both fall outside of legal protections: You can legally be fired or have your children taken away for both, and both — like LGBTQ identity — have been vilified as forms of social deviance and mental illness.

But the queer definition is less clear here. Some would argue that straight polyamorists and kinksters aren’t queer because polyamory and kink are external practices rather than internal identities: People do kink, but people are trans. Some might even wrinkle their noses at the idea of straight people trying to apply an anti-LGBTQ slur to themselves when they don’t identify as LGBTQ.

Others might say that if straight polyamorists and kinksters are willing to live openly, create community for others like them, empower the voices of other LGBTQ people and fight for sexual freedom and LGBTQ rights, then sure, they can be part of the “queer family.”