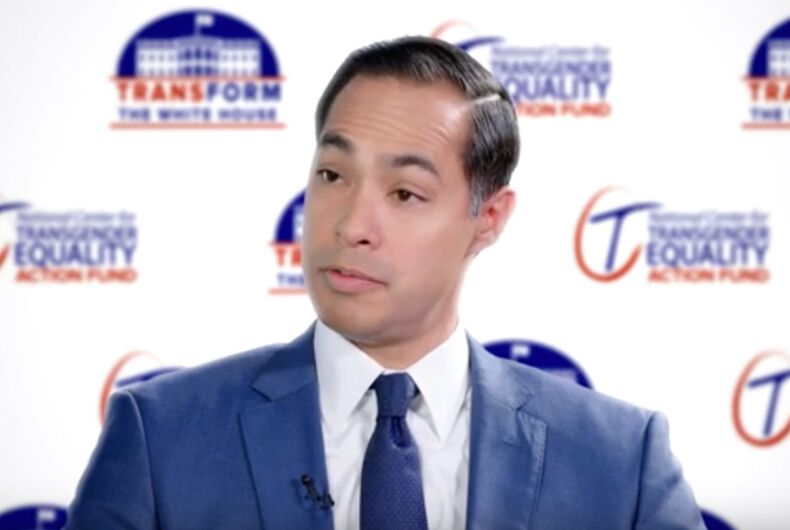 The National Center for Transgender Equality is continuing their sit down interviews with Democratic presidential candidates, “Transform the White House,” and this time former HUD Secretary Julian Castro.

Executive Director Mara Keisling sat down with Castro to go over his long record as an LGBT ally. Castro, a former mayor of San Antonio, Texas, has been particularly supportive of transgender people.

Castro is hardly a household name, but he’s a party insider who has long been tagged as one of the rising stars of the Democratic party. At age 44, he’s also among the youngest of the would-be contenders.

His first moment of national attention came in 2012, when he delivered the keynote address at the Democratic National Convention. He joined the Obama administration in 2014 as Secretary of Housing and Urban Development, making him the youngest Cabinet member. He stayed in the position through end of Obama’s term in office.

Castro talks about the lessons he learned as HUD Secretary on how to make sure government regulations and laws are inclusive and welcoming. As HUD Secretary, Castro oversaw the expansion of dozens of regulations to be more inclusive of the LGBTQ community – from nondiscrimination protections to standards for homeless shelters.

Sadly, Castro isn’t making as big of a splash as he deserves. While other older and more established candidates like Senator Bernie Sanders or former Vice President Joe Biden have hogged up the limelight, Castro deserves more attention than he’s received.

His chances of becoming President are slim, but a wise candidate would keep him on their Veep shortlist.

Being a digital nomad costs half as much as living in Seattle.