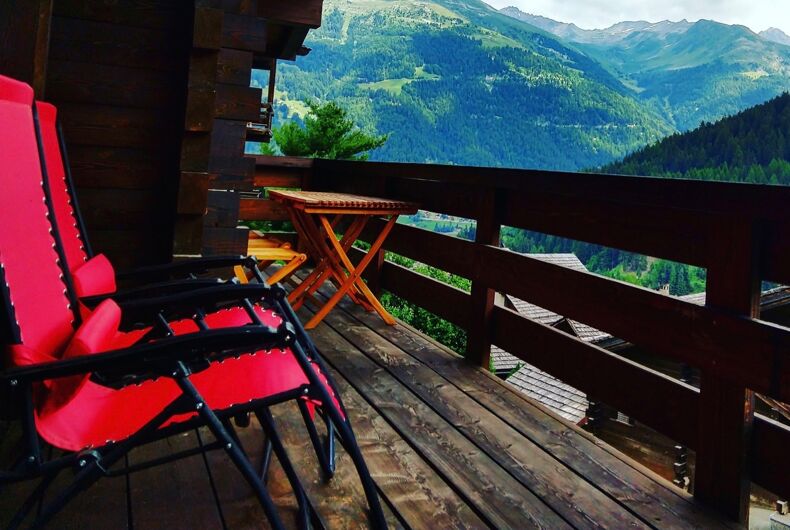 Switzerland was beautiful, but we couldn't afford to stay there for more than a month. Or to eat out.Photo: Michael Jensen & Brent Hartinger

Thanks to everyone who read and shared last week’s column about how the two of us sold everything we owned back in 2017, and started traveling the world as a gay “digital nomad” couple. Honestly, we were amazed by the response and are excited so many people want to follow along on our journey.

We read all the feedback, and plan to address a lot of it in future columns. But one question came up again and again: How can we afford to travel all over the world?

Honestly, when we left Seattle, we just hoped to keep our living expenses at their current level. It turns out we were in for a happy surprise.

In Seattle, our mortgage and utilities ran about $2700/month. Groceries, restaurants, Starbucks, and the such another $1500/month. Home repairs, auto, gas, and other expenses: $700, with another $1500 for healthcare, entertainment, vacations and other one-time expenses.

In a city as expensive as Seattle, that actually didn’t go very far. (None of the numbers in this column include our taxes or business expenses related to our professional careers.)

Our monthly rent now varies — by a lot. We often live in countries that are much cheaper by Western standards. Monthly rent in Bulgaria was $300/month — for a nice, two-bedroom apartment. In Vietnam, we paid $700/month, with breakfast and bike rentals included. In Italy, rent was $1100.

Sometimes we stay in more expensive cities and countries. Our most expensive rents so far have been $2000/month in both the Swiss Alps and Miami.

We sometimes rent via Airbnb or Booking.com, but it’s sometimes cheaper to find accommodations locally. Obviously, we no longer pay utilities or home insurance.

And every year, we spend about a month rent-free staying with friends. We also spend about two months a year living on cruise ships, paying cheaper last-minute or repositioning fares ($2500/month); when you’re not paying a rent or mortgage, and when you throw in the cost of airfare and food, it’s actually cheaper for us to get between continents via cruise ship.

But this only works because we’re a couple, and we’re fine with the cheaper, interior cabins. Our work also allows us to avoid paying the pricey, onboard internet packages.

We eat out way more now, but restaurants and groceries tend to be a lot cheaper, so our food budget is cheaper ($1000/month). We have more transportation costs, but we no longer maintain a car, so that’s probably a wash ($500/month). We don’t do “vacations,” since our whole life is traveling, but we do occasionally rent hotel rooms en route to different locations ($100/month).

Since we both like going into an “office” to work, we sometimes use a “coworking” facility ($1800 for coworking this year, or $150/month). Throw in another $500/month for various fees, entertainment, and expenses. (Health insurance is complicated, the subject of another column, but right now we have a basic Obamacare bronze plan, partly subsidized, with supplementary travel insurance, since unlike other national plans, American insurance pays absolutely nothing overseas.)

So yeah. We’re traveling the world, seeing amazing things and having incredible experiences for slightly more than half the money we spent maintaining a modest house in Seattle.

There are some caveats. Neither of us drinks much, and while we have a very active social life, we don’t do the party scene. We eat out a lot, but rarely go to pricy restaurants — no more than once or twice a month. We spend very little on clothes or the latest tech gadget. We currently use Google Fi, which has cheap international phone plans, and we both have basic Android devices.

Our accommodations are usually reasonably nice, with private rooms: much better than hostel-living. But sometimes we have a studio, and occasionally, we have to share bathrooms with other rooms. The beds vary in quality. In poorer countries, the utilities don’t always work seamlessly; sometimes you can’t even drink the water. (Just last night here in Tbilisi the water was out for much of the day.)

On the other hand, we’re less frugal than we were in Seattle, and it doesn’t feel like we’re depriving ourselves of anything except outright luxury. We almost never decline to do something interesting due to cost.

And did I mention we eat out almost every night?

It must also be said: some of our digital nomad friends live more lavishly than we do, but some also live more frugally, on $20,000 or less a year (as a single person). Younger digital nomads often try to keep their costs low because they’re enjoying life, or committed to surfing or some other activity, or because they’re trying to set-up an online business. Some folks are practicing FIRE (Financial Independence, Retire Early) and keep their costs as low as possible so they can retire in their 40s or 50s.

In these cases, nomads spend even more time in less expensive countries than we do. But even these folks are able to live pretty well, since the cost of living is so dramatically less than even the cheapest places in the U.S.

There’s also a third category of digital nomad: tech workers with very high salaries who are able to work remotely. One digital nomad friend works for a New York company, which keeps encouraging him to move back and work in-office. But he keeps telling them: “Since my costs as a digital nomad are so low, and the cost of living in New York is so high, unless you’re planning to triple my salary, you’re asking me to take a massive pay cut.”

From our point of view, the best part of digital nomad finances isn’t the lower cost of living; it’s the flexibility and ability to enjoy so many new things without having to stress about the money.