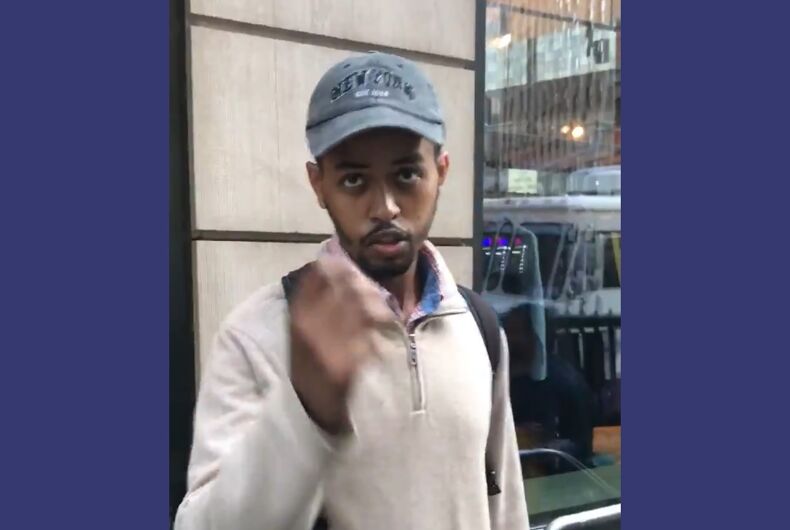 A crazed homophobe yelled at a gay man in New York City, who caught the entire interaction on his phone.

Adam Eli was wearing a pink kippah and a purse while he had a Pride patch on his jeans.

As he was exiting the subway this past Sunday, someone started yelling homophobic taunts at him. “He started following me and chasing me and yelling at me, and then I realized how angry he was and how intense it was getting, so I started filming,” Eli told CBS News.

“You’re desecrating the name of God,” the man can be heard saying in the video.

“What, because I’m gay and wearing a kippah? Is that why?” Eli asked.

The man said that it was “Chillul Hashem,” a Hebrew expression for desecrating the name of God.

“Any man that lays with another man is an abomination,” the man yelled. “You’ll be murdered for it. Take the kippah off.”

“Take your kippah off. This is not Judaism.” The man’s shouting at the top of his lungs at this point of the video.

THREAD: Trigger Warning: violent speech, harassment. I got harassed, followed and threatened on the street today. Someone was upset that I was wearing a pink kippah, carrying a purse and had a pride patch sewn onto my jeans. I am sharing the encounter for three reasons. pic.twitter.com/Y9HWiX2nSs

He said that he hid in a store until the man left. He has not filed a police report because he doesn’t think it’ll help.

“It takes courage to confront homophobia and tell a story like this,” de Blasio tweeted. “There’s no place for hate in this city.”

It takes courage to confront homophobia and tell a story like this.

I’m sorry you had to go through this, Adam. But we’re proud of how you responded.

There’s no place for hate in this city. https://t.co/9SqgfRQhJd

Jerry Falwell Jr was caught at a Miami nightclub & lied about it. Now the photos are coming out.