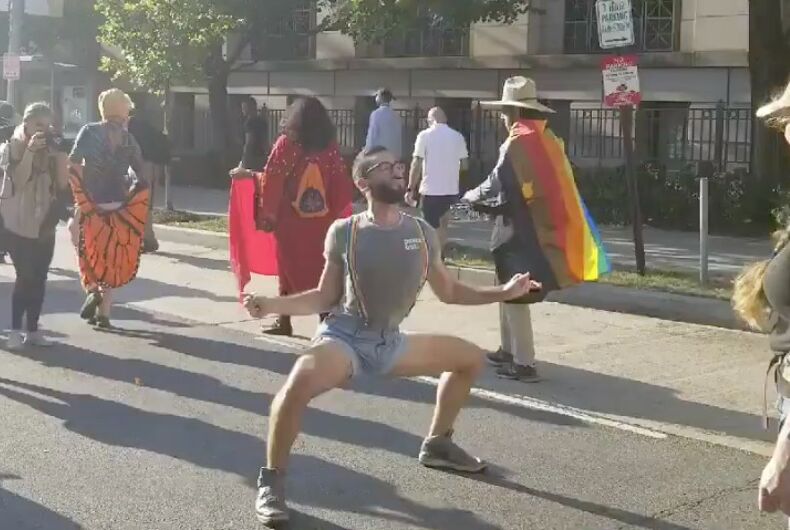 A Werk For Peace dancer struts his stuff during an environment protest in DCPhoto: Screenshot

On Monday morning, 150 queer protestors took to the streets of Washington DC to fight climate change through dance.

The protestors were part of the organization Werk for Peace, a queer and trans dance group that describes themselves as a grassroots movement using dance to promote peace. On Monday, they joined the “Shut Down D.C.” demonstration, during which about 1,000 people both stood and sat in the streets to block traffic during rush hour. The Werk for Peace protestors, of course, preferred to dance.

The intent was to call attention to the world’s climate crisis on the same day that the United Nations Climate Action Summit took place in New York.

The Washington Blade reported that the Werk for Peace dancers met at the intersection of Massachusetts Avenue and North Capitol Street. Followed by a person on a bicycle pulling a wagon carrying loudspeakers, they danced their way to both the Wells Fargo Bank and the American Petroleum Institute, two corporations they feel are large contributors to climate change.

Videos posted to social media show participants grooving to the blasting music and even throwing colorful (and biodegradable) confetti into the air.

Though the Shut Down D.C. demonstration was non-violent, there were a total of 26 arrests. Kaela Bamberger, a spokesperson from the Coalition to Shut Down D.C., told the Blade that Werk for Peace dancers were not arrested because they did not continuously block the streets.

“Many of those people are queer and trans, and we wanted to stand in solidarity with everyone who is working on this issue and also show the world that queer and trans people are here to fight for our climate and for our mother earth.”

Werk for Peace was founded in 2016 as a response to the Pulse nightclub shooting. Over two years, they have staged twelve dance protests, involving thousands of participants and have even danced in front of homes of politicians like Mike Pence and Mitch McConnell.

The organization believes dance is healing and allows people to connect with one another.

“Dance was taken away from us by hate,” their website declares. “Today, we choose to reclaim it.”

Climate activists turning up the heat in front of the US Capitol. Roads remained closed, gridlock could last for hours. pic.twitter.com/iDl4Zq1Ncw

#ShutDownDC is a rolling blockade/dance party. I love it. Conversations about the climate crisis are so often fear & dread (as they should be) — but that doesn't mean there can't be joy in the fight. We're demanding the just world we need, and we're going to dance while we do it. pic.twitter.com/18zn8baNRF

Nancy Pelosi opened an impeachment inquiry of Donald Trump. LGBTQ politicians are backing her up.