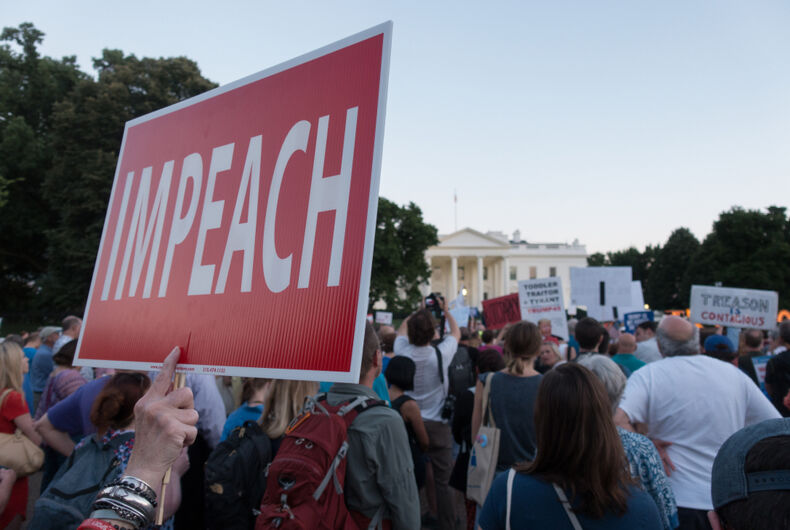 As Nancy Pelosi has launched an impeachment inquiry of Donald Trump, almost all of the most national LGBTQ elected office holders are joining her. Only Arizona Senator Kyrsten Sinema has not.

According to the Wall Street Journal, the report from someone in the U.S. intelligence community alleges that in a July phone call Trump pressured Ukraine “about eight times” to work with his lawyer Rudy Giuliani in the investigation. Rumors that Trump threatened foreign aid to Ukraine in order to get them to investigate Biden’s family – and that his administration has intimidated the whistleblower – are circulating.

Yesterday, the U.S. Senate unanimously supported a resolution calling on Trump to release the report. The administration is legally required to forward the report to Congress, but has so far refused to do. The White House announced after Pelosi launched the inquiry that they will provide a redacted copy to legislators in a few days.

Calls for impeachment have reached a fever pitch since the news broke, and House Speaker Nancy Pelosi (D-CA) said yesterday afternoon: “The House of Representatives is moving forward with an official impeachment inquiry.”

Almost all LGBTQ politicians are backing her up. Senator Tammy Baldwin (D-WI) came out in support of the House impeachment proceedings.

“The House is taking appropriate action,” Baldwin tweeted last night. “We cannot accept President Trump attacking and intimidating this whistleblower, and by law, the Trump Administration needs to turn over this whistleblower complaint to Congress.”

Senator Kyrsten Sinema (D-AZ), the other out U.S. senator, is the only LGBTQ national politician who is still waffling on the question.

“I agree with my Republican and Democratic Senate colleagues that Congress must be given complete access to the whistleblower’s report and transcript as required by law,” she said in a statement. “Arizonans deserve a transparent and accountable government.”

South Bend Mayor and 2020 Democratic presidential hopeful Pete Buttigieg said of impeachment: “Sooner or later it had to come.”

He explained on CNN that Trump has committed a number of impeachable acts but that there were so many that it “shocked the system.”

“We have seen in plain view the president of the United States confess to wrong-doing,” he said, adding that Trump “sold out U.S. national security interests to go after a political opponent.”

This is a moment of truth. This isn’t just about this president. This is about the American presidency—and we need to draw the line. pic.twitter.com/wZ2S20aIBr

While some House Democrats have not yet backed impeachment, LGBTQ U.S. Representatives are standing together for accountability.