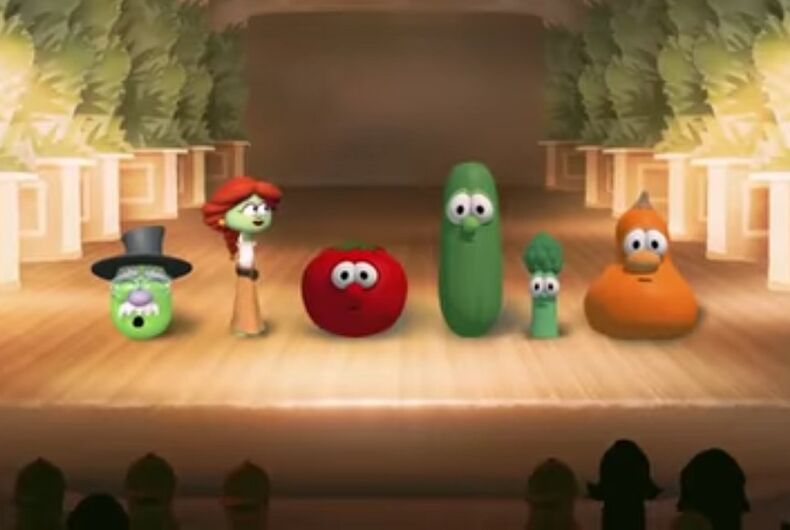 A co-creator of the Christian children’s show VeggieTales is speaking out against the same-sex marriage that took place on Arthur, calling the episode “concerning.”

Phil Vischer told the Christian Post that parents need to be worried about LGBTQ issues being brought up in children’s media more.

“Parents are definitely going to have to deal with a growing LGBT presence in children’s media,” he said. “It’s going to show up more and more as the world has decided that LGBT issues are in the same categories as race and civil rights issues. So to say you shouldn’t have a same-sex couple on Sesame Street is the equivalent of saying you shouldn’t have a black couple on Sesame Street.”

He brought up Arthur, PBS’s long-running children’s cartoon where the kids’ teacher Mr. Ratburn married a man earlier this year. Vischer said that he was the most surprised by how the kids in the show didn’t have negative reactions to the same-sex marriage.

“The most striking thing about that episode of Arthur wasn’t that they thought it was time to introduce kids to gay marriage; it was the reaction of all the kids on the show,” he said. “None of them asked questions about why two men were getting married. Their reaction was, ‘Oh, OK! Great!’”

He said it was “concerning” that the episode had a message of tolerance instead of showing kids having a negative reaction to their teacher getting married, something that he wouldn’t have expected the show to do if the teacher married a woman.

“It’s such a strong message of, well kids, of course you’re fine with gay marriage, because there’s nothing to question about it,” he said. “That’s a little more concerning.”

As for VeggieTales, he said that they will have to address LGBTQ issues “at some point.” But he said that would be hard because he doesn’t want to take a position that some Christians would disagree with. Many Christian parents are extremely homophobic, while others might be offended if VeggieTales expressed that hatred.

“First: the nuance of how to treat LGBT issues isn’t agreed upon within the Church; and secondly, some parents may want to have that talk with their kids. It’s tricky because it’s so divisive. It would be hard to do it in a way that works and matches everyone’s expectations,” he said.

“It would be easy to do it poorly. It’s still so controversial; I’m not sure what I would add that would be helpful enough in the conversation that it’s worth the number of people I could offend.”

Ultimately, though, he said there won’t be a same-sex marriage any time soon on VeggieTales, no matter how much “Hollywood” pressures him.

“If I get pressure from Hollywood to show two men getting married because we’ve all decided it’s right and correct, my pushback is: ‘No, I won’t. Because that’s not what I believe is best for kids.'”

“It’s more about what we show as normal rather than explicitly showing something and saying, ‘That’s wrong.’ I’m portraying the positive rather than the negative.”