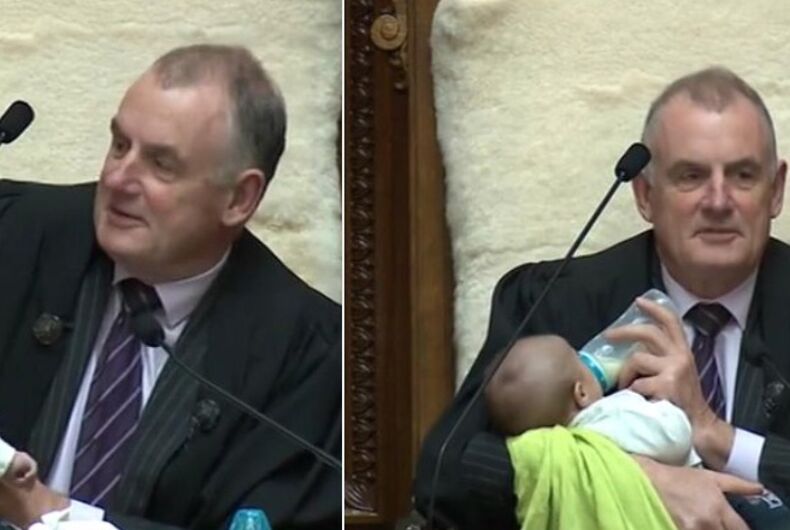 The speaker of the New Zealand Parliament, Trevor Ballard, presided over a contentious debate the other day, but he wasn’t alone: cradled in his arms was 1-month-old Tutanekai Smith-Coffey, the son of MP Tamati Coffey and his husband, Tim Smith.

Coffey and Smith had their baby, who was born on July 10, via a surrogate. Smith is the birth father, and pair are currently in the process of adopting their baby.

Coffey brought their baby with him to Parliament as he returned to the body following paternity leave.

Parliament Speaker Trevor Mallard has said he’d like to make Parliament a more family-friendly place, and this time he made it quite clear – by sharing the speaker’s chair with the baby during the general debate.

Said Coffey, “It is well known that the Speaker loves babies and has created a Parliament that is receptive to babies and is whanau friendly so I knew that he would be keen.”

Mallard cradled and even bottle fed the baby during the proceedings

“Normally the Speaker’s chair is only used by Presiding Officers but today a VIP took the chair with me,” said Mallard via Twitter. “Congratulations @tamaticoffey and Tim on the newest member of your family.”

Normally the Speaker’s chair is only used by Presiding Officers but today a VIP took the chair with me. Congratulations @tamaticoffey and Tim on the newest member of your family. pic.twitter.com/47ViKHsKkA

Other Members of Parliament welcomed Coffey and the baby, with Coffey telling Newshub, “I’ve felt really supported by my colleagues from across the House.”

Many others hared photos of the moment on their own Twitter accounts.

Who needs to see this today? Every single last one of us, that’s who. Here’s a brand new papa holding his new born in our House of Representatives right now 😭❤️ pic.twitter.com/NU00SHfKFT

Lovely to have a baby in the House, and what a beautiful one @tamaticoffey pic.twitter.com/EP6iP9eQES

This isn’t the first time a baby has been present in the New Zealand Parliament: in 2017, MP Willow-Jean Prime was in the news for breastfeeding her baby, Heeni, there in 2017.