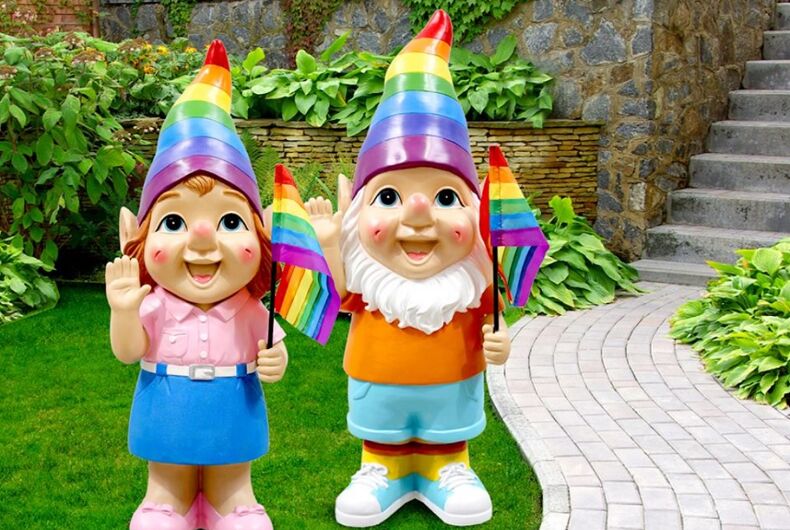 A man allegedly threw a giant temper tantrum at a grocery store when he saw rainbow-themed garden gnomes for sale.

According to PlymouthLive, police had to be called this past Saturday afternoon to an Asda store in the UK when a man created a disturbance over garden gnomes.

A witness said that the man had a rainbow gnome like the one in the picture below in his bag when he started “causing a disturbance.”

“The guy started saying random things like it’s a gnome, it offended him as they don’t have a sexuality,” the witness said.

Related: Oklahoma lawmaker says ‘Gays don’t have a right to be served in every single store’

“I’m assuming the guy was offended as they look like they have a gender, that’s the bit I caught of the situation.”

The Devon and Cornwall Police said that the man was “abusive and loud” when four officers showed up at the store, after they were told that a man was shouting at staff.

He was “was advised to leave the store by officers at the scene,” according to a police spokesperson. They say that he “eventually” cooperated.

“The man was making a complaint about an item he had bought,” was all the police would say about his motives.

A spokesperson for Asda confirmed that there was an incident with a man who was “highly aggressive” in that store.

“We don’t accept threatening or abusive behaviour towards colleagues or customers,” the spokesperson said.

Nivea doesn’t ‘do gay,’ according to an ad agency that just dumped them