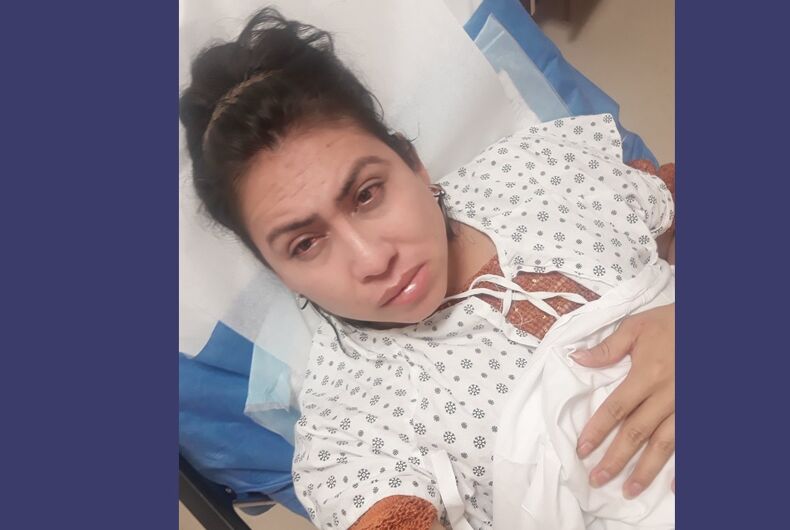 Two transgender activists were attacked in the streets of New York City this weekend while they were working on a film about violence against transgender people.

Norma Ureiro and Bianey Garcia, the filmmakers, were recording video in Queens at 2:35 a.m. Saturday when they got into an argument with a man and a woman. The man and woman shouted anti-transgender slurs at them.

The woman, Paola Custodio, then pepper-sprayed the activists, getting Ureiro on her chest and Garcia on her back.

My sister Norma Ureiro and I we just got pepper sprayed at 82nd St & Roosevelt Av by a transphobic woman. She offended us by calling us fucking fagots, fucking whores ect.
(Enough is enough) 😡😡😡😡 pic.twitter.com/50mmpqtd6Y

Police showed up and arrested Custodio at the scene. She is facing charges of felony assault as a hate crime and aggravated harassment.

Garcia and Ureiro refused medical attention when the police were there.

But after the police left, the man came back and sprayed Garcia in the face, calling her a “fucking faggot.” She called the police again.

Garcia was taken to the hospital for treatment.

Transphobia is real
(Enough is enough)

A video from the hospital after a transphobic man pepper sprayed me in my face. #Stonewall50 #WorldPride2019

“This time it was only pepper spray but next time it could be a knife or a gun,” Ureiro told the New York Daily News.

Both Garcia and Ureiro are associated with the transgender immigrant of color organization Make the Road, which held a rally yesterday to denounce the attack.

At the rally, Garcia said that Custodio was only arrested because she was being aggressive with police, and that police refused to arrest the man who sprayed Garcia in the face.

Today, members of my team attended the rally against transphobia on our streets. @BianeyDlaO was pepper sprayed simply for walking on the street in her own neighborhood, and we won’t stand for this hate. #SeenIn13 pic.twitter.com/jm9uo3XgVl

She said that the man assumed that they were sex workers because they’re transgender and said that he’d “make [them] pay” if they came back. Police allegedly told the women to shoot their documentary elsewhere as a solution.

“The police violated our rights,” Ureiro said. “They completely ignored us. They needed to take seriously the threats they made.”

Custodio has been released from jail without bail, according to court records. She has been ordered not to contact Ureiro.