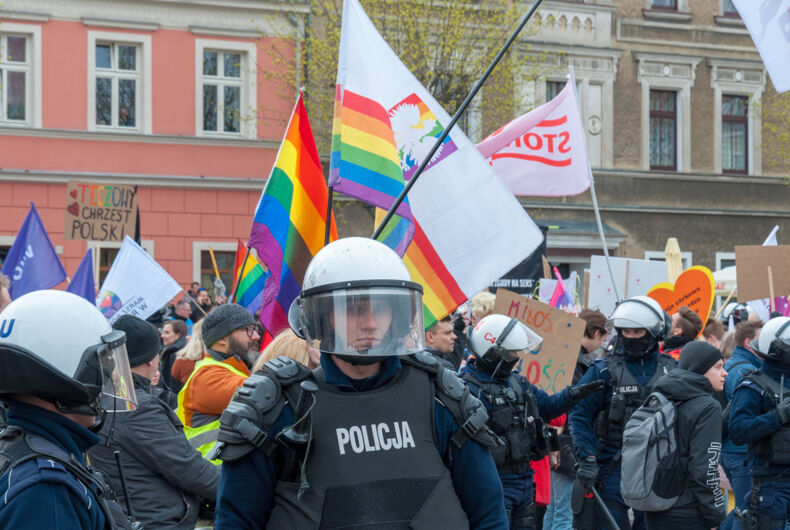 Government officials in at least 30 towns, villages, and regional assemblies throughout the staunchly Catholic country of Poland have declared themselves to be “free of LGBT ideology”.

Does this mean these places are “free” of LGBTQ people as well? And what exactly is the supposed “LGBT ideology,” since there are as many “ideologies” as there are LGBTQ people. Unlike Polish officials’ apparent conceptualizations, we do not constitute a monolithic community marching in lockstep.

According to the Polish LGBTQ non-profit civil rights group, The Campaign Against Homophobia (KPH), the town of Swidnik in eastern Poland was one of the first to declare that it was “free of LGBT ideology” in March.

In addition, the southern city of Lublin gave awards recently to local officials who have opposed, “LGBT ideology, which goes against the family, the nation and the Polish state.”

In fact, ruling right-wing so-called Law and Justice (PiS) party leader Jaroslaw Kaczynski condemned gay rights in April as a “threat” to the state. He has placed opposition to the highly contested topic of LGBTQ rights as a top priority in his reelection campaign scheduled for the fall in what he termed as an “ideological war.”

Recently, Polish bishops accused Swedish furniture giant, IKEA, of “LGBT indoctrination” after officials fired an employee for refusing to take down a homophobic comment he posted on the company’s internal website.

In June, the Polish Constitutional Court ruled in favor of a printer who refused to fill an order from an LGBT organization. As in the United States, this decision has inflamed contentious debates over whether merchants’ deeply-held religious convictions trump clients’ rights to be served.

These homophobic proclamations appear to be a direct reaction against an anti-discrimination proclamation signed and adopted by Warsaw Mayor, Rafał Trzaskowski in February aimed at protecting LGBTQ rights.

Throughout recorded history, governments and religious institutions have devised ways of silencing opposition for the purpose of maintaining control and domination. They have gone so far as to kill those who speak and live their truth when this contradicts “official” policies and teachings.

The Catholic Church, as one such religious institution, has wronged and at times murdered those who have advanced beliefs that ran contrary to Church “teachings.”

For example, the Church convicted physicist and astronomer Galileo Galilei on the charge of heresy by insisting that the Earth revolves around the Sun, rather than, as per Church teaching, the Earth was the immovable center of the universe with the Sun revolving around the Earth. The Church forced Galileo to spend the remainder of his life under house arrest. It took the Church under Pope Paul II approximately 350 years to finally admit that they got it wrong.

A key factor in the development of orthodox Catholic ethics since the 13th century is the concept of “Natural Law,” which includes a set of standards that the Church has inferred follow an ordering of nature.

Joan of Arc, the teenager who helped defeat the English in her native France, became one of the greatest war heroes in French history. Despite this, she was tried by the Catholic Church on the charge of heresy in rejecting Church authority in preference for direct inspiration from God, and most importantly, by donning men’s clothing. The Church murdered Joan by burning at the stake.

Basing itself upon Sacred Scripture, which presents homosexual acts as acts of grave depravity, tradition has always declared that homosexual acts are intrinsically disordered. They are contrary to natural law. They close the sexual act to the gift of love [i.e., children]. They do not proceed from a genuine affective and sexual complementarity. Under no circumstances can they be approved.”

Dominican Brother Nicanor Pier Giorgio Austriaco, in his book The Myth of the Gay Gene, elaborates on this theme.

The Church teaches that as embodied spiritual creatures, human beings were created male and female so that in the complementarity of the sexes, they can reflect the inner unity of the Creator. This was recognized and confirmed by the Lord Jesus who instituted the sacrament of marriage to celebrate the divine plan of the loving and life-giving union of men and women.”

The ‘Pro-LGBTQ Pope’ Is Anything But

Pope Francis, in his relatively short time serving as the leader of the Catholic Church has talked about inclusion and acceptance for diversity. Apparently, he hopes to take the Church out of the 17th Century and carry it on the wings of a dove to at least the 20th regarding the concerns of LGBTQ people.

But alas, the dove has died – as has the hope. His policies on topics of same-sex sexuality have remained unchanged. Even more troubling, the Pope has further tightened Church restrictions on trans identities.

The Vatican hierarchy recently fenced off Alex Salinas, a 21-year-old transman from Cadiz, Spain, by informing him that it had denied his request to become the godparent of his nephew because being transgender is incongruent with Catholic teaching. According to the Church’s Congregation for the Doctrine of the Faith, its doctrine-enforcing agency:

Transgender status “reveals in a public way an attitude opposite to the moral imperative of solving the problem of sexual identity according to the truth of one’s own sexuality. Therefore, it is evident that this person does not possess the requirement of leading a life according to the faith and in the position of godfather and is therefore unable to be admitted to the position of godfather or godmother.”

In his April 2016 letter focusing on marriage and the family titled Amoris Laetitia (“The Joy of Love”), Pope Francis sternly warned against gender transition procedures when he stressed that “conditioning children into believing a lifetime of chemical and surgical impersonation of the opposite sex is normal and healthful is child abuse.”

Later, in a meeting with Bishops during his pilgrimage to Poland in July 2016, Francis talked about current times in which, “We are living a moment of annihilation of man as image of God.” Francis referenced Pope Benedict XVI, his still-living predecessor, who branded these times as “the epoch of sin against God the Creator.”

Frances took this occasion to inflict another tirade against trans people when he warned, “Today, in schools they are teaching this to children – to children! – that everyone can choose their gender.”

He condemned this on what he cited as “ideological colonizing” backed by “very influential countries,” which he did not name. One such “colonization,” he said – “I’ll say it clearly with its first and last name – is gender.”

When religious leaders preach their damaging interpretations of their sacred texts on issues of same-sex relationships or identities and gender non-conformity within and outside their houses of worship, they must be held accountable for aiding and abetting those who target and harass, bully, physically assault, and murder people perceived as LGBT.

Nearly every two days, a person is killed somewhere in the world for expressing gender nonconformity. Most murders are of trans women of color.

In addition, religious leaders and entire denominations must be held accountable as accomplices in the suicides of those who are the targets of these abusive actions, and who grow up in a religious denomination and larger society that teaches them to deny, to hide, and to hate themselves.

The historical Jesus – if, in fact, he ever existed – was absolutely silent on the topic of same-sex sexuality and relationships. Biblical writers who had never met the historical Jesus authored these condemnations, which the devout hold as the actual words of God.

They also believe in the supposed virgin birth, Jesus walking on water and turning water into wine, healing the sick, and performing other “miracles.” They see no inconsistency between the gaudy excesses of the Vatican and of Catholic churches throughout the world with Jesus’ message of living modestly, abhorring conspicuous consumption, and condemning accumulation of exorbitant wealth.

Poland at a Crossroad

Polish residents marched on their 99th annual Independence Day throughout the streets of Warsaw on November 11, 2017 with upwards of 60,000 people shouting chants and carrying Nazi and white supremacist paraphernalia, where some marchers called for a “white Europe” and an “Islamic Holocaust.”

The Foreign Minister from Poland’s Law and Justice Party said following the march that the day had been “a great celebration of Poles, differing in their views, but united around the common values of freedom and loyalty to an independent homeland.”

The rising tide of fascism demonstrated in Poland represents a larger movement gaining hold throughout Europe and the United States. We have long since passed the point where it is merely hyperbole to compare the rise and control of the Nazis in the 1920s and 1930s to the rise and possible take-over of fascism throughout Western democracies and in some other countries around the world.

Poland now finds itself at a crossroads of sorts, where long-standing official policies, church teachings, and personal belief systems conspire in the exclusion of LGBTQ people, Muslims, Jews, and a still relatively small (but growing) segment of the population that genuinely desires a truly diverse and multicultural nation. The road the Polish nation decides to travel today will have implications for generations to come.

Poland’s own LGBTQ organization speaks out

The offices of Kampania Przeciw Homofobii (Campaign Against Homophobia, an LGBT rights group) were yesterday attacked for the fourth time in the last 14 months. The organization criticizes the ‘passivity of the authorities’ in recognizing hate crimes against the LGBT community. In particular they want it to be made a specific offense to carry out a crime motivated by the victims’ sexual orientation or gender identity.

Currently crimes committed on the basis of hatred towards religious, ethnic, racial or certain other groups are given a special, more serious status, but crimes motivated by prejudice against the LGBT community carry no additional penalty.

The previous government had begun work on changing the law to take account of anti-LGBT hate crimes, but this was ended by the new administration last year. To highlight the extent of the problem, KPH point to a survey taken last year that found three in ten LGBT Poles have suffered violence motivated by hate in the last five years, and 57% have been discouraged by the police from reporting crimes.

These men worked for different Catholic schools. Until they got married & the church targeted them.