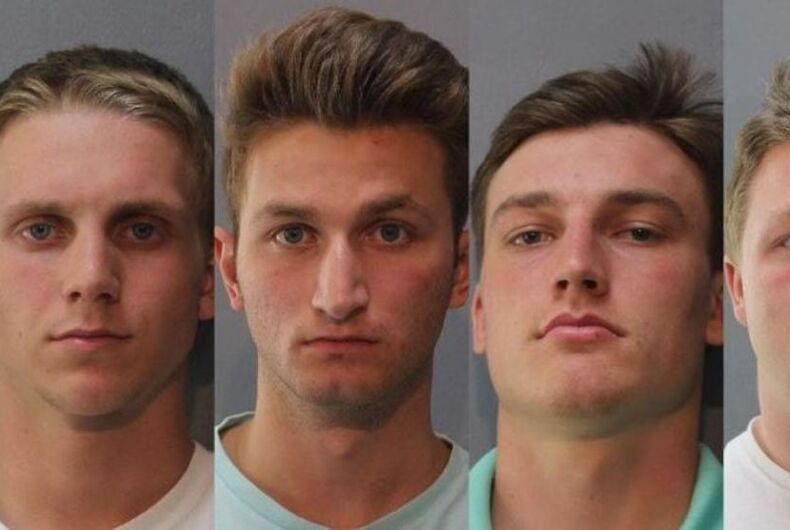 Several high school students who vandalized their school with hateful slurs were caught because their phones automatically connected to the school’s wireless network.

Seth Taylor, Tyler Curtiss, Joshua Shaffer, and Matthew Lipp were seniors at Glenelg High School in Maryland last year when they broke into the school for a senior prank at nearly midnight one day in May.

They said that they intended to paint “Class of 2018” in the school, but instead they painted racist, homophobic, and anti-semitic slurs, as well as penises, swastikas, and other images. They left over 50 drawings or words on the walls of the school.

The graffiti also targeted the school’s principal, David Burton, who is black.

“This was something that was 50 separate acts of hate, you have anti-Semitic graffiti, you have racist graffiti, racist graffiti that targeted Principal Burton by name, you have homophobic references that were made,” State’s Attorney Rich Gibson said in a press conference. “This is an act of violence that rips the fabric of our community.”

And they would have gotten away with it, too, if it weren’t for their cell phones.

The four teens used their T-shirts to hide their faces so they couldn’t be identified on the school’s security cameras. But their phones automatically connected to the school’s wireless network with a unique ID number.

They were sentenced to probation, community service, and between nine and eighteen weekends in jail each, although they only ended up serving part of their sentences.

A bisexual man was banned from donating blood. So he donated a kidney instead.