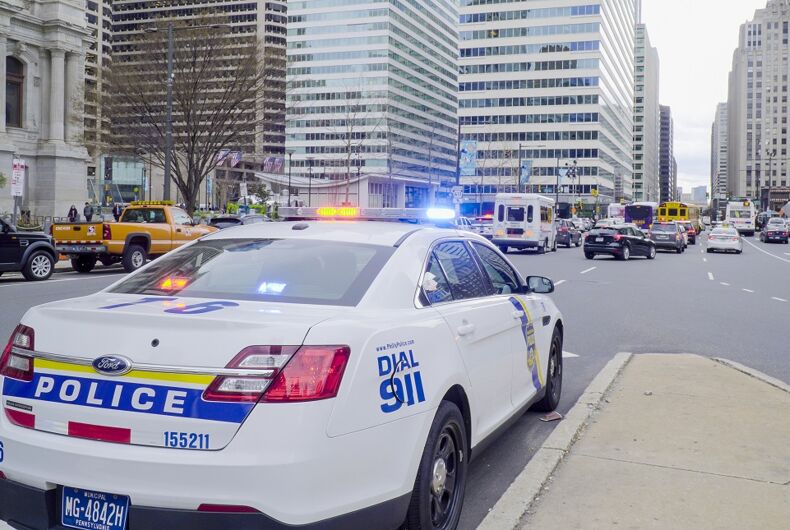 Thirteen police officers in Philadelphia will be fired after they were found posting racist, homophobic, and transphobic messages on social media. The social media posts were found by the Plain View Project, which tracks hate speech by law enforcement officials.

Police Commissioner Richard Ross said yesterday that 328 police officers were included in the database and that the 13 who were fired were the worst offenders with the most violent posts. Four additional officers were suspended for 30 days and must undergo anti-bias training after they posted less violent but still discriminatory posts.

Related: Pete Buttigieg shut down a supporter who tried to blame black people for police brutality

Another set of officers has been suspended for five days for violating the police department’s social media policy, even though they didn’t post anything violent or hateful. All Philadelphia police officers will be required to watch a training video on social media use.

“I continue to be very disappointed and angered by these posts, many of which violate basic human decency,” Ross said as a press conference. “We need to move past this ridiculous hate that has consumed this country and has done so for centuries.”

The officers have not been identified publicly.

Screenshots of the hateful messages are still available on the Plain View Project’s database. One officer wrote “silly faggot, dicks are for chicks.”

“how do u kno ur at a gay bbq…..all the hot dogs taste like shit!!” another wrote.

Others used the word “faggot” without referring to someone who is gay.

An officer, citing a transgender “bathroom controversy,” wrote, “It’s time to round up the liberals & place them in internment camps.” A commenter said to “put them all in the gas chamber.”

In a different post, that same officer deadnamed Caitlyn Jenner and wrote “hoping [Jenner] gets ass raped by a make believe transgender in a bathroom.”

Several other officers posted memes and cartoons of men in women’s bathrooms with messages that said that transgender women lie about their gender identity in order to assault women and girls.

Many of the posts were racist. One Philadelphia police officer posted a meme with pictures of prominent African Americans like Barack Obama and Al Sharpton, calling them “thugs.” Another posted a video of a Black Lives Matter protestor getting hit by a car and called it “funny,” and another said that Black Lives Matter is “black supremacist.”

An officer linked a blog post about black people getting provisions after a hurricane and called them “cockroaches.”

Many of the posts in the database don’t advocate hate against a class of people but glorify police brutality, like a post from an officer who said a suspect should be “taken out back and put down like the rabid animal he is.”

Fraternal Order of Police officer John McNesby said that they are “disappointed officers will be fired without due process.”

“FOP Lodge #5 and our members condemn racist and hateful speech in any form,” he said, explaining that he would be meeting each officer to determine the “appropriate response to protect our members’ rights under the contract.”