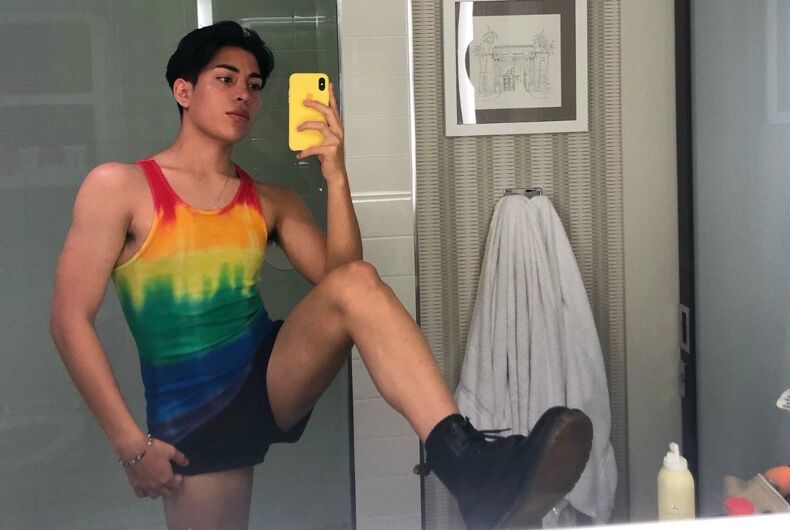 When Kent Mendez, 19, fled his home, he left behind a heartbreaking note to his parents explaining why he had to leave. His family wouldn’t accept him as a gay man.

After Mendez posted a copy of the letter – written in both English and Spanish – on Twitter, the web has exploded with outpouring of sympathy and gestures of kindness that will make your heart grow three sizes too big.

“There hasn’t been a day where I haven’t cried or struggled to find the energy to get out of bed,” Mendez opened. “This doesn’t feel like a home and I don’t think it ever will.”

“You have accused me of being a bad person, of being an embarrassment, and telling me I have a psychological disorder. I don’t think you guys will ever understand what it’s like to hear that from your own parents and how harmful and damaging it is to a child.”

After listing other efforts his parents made to “cure” him of homosexuality, Mendez patiently explained where his parents had gone wrong by not respecting his journey to self-discovery and peace with his sexuality.

“The other day you asked me what parents were for,” Mendez wrote. “Parents are supposed to love and accept their children unconditionally.”

“It took me a lifetime to get to a point where I’m happy and secure with who I am and it breaks my hear that the two people that have supported me my entire life do not accept me when I’m finally happy with who I am. It pains me that you both can’t put aside your personal opinions and views and just love and accept me for who I am.”

The teen goes on to list statistics about LGBTQ teens who attempt suicide, noting that the lack of parental support increases the odds dramatically.

“I’m leaving because I refuse to become another statistic,” he wrote.

Mendez closed by telling his parents not to bother contacting him unless they decided to accept him for who he is. In a later tweet, he revealed that they hadn’t contacted him since he left.

The teen is currently staying with a friend and wanted to make sure everyone knew he wasn’t looking for sympathy or attention when he posted his letter.

“I’m not sharing this for pity or for attention but because I know there are people out there just like me who are scared and stuck in abusive homes and I want to be an example that you’re never stuck and that there is a light at the end of the tunnel,” he tweeted after his missive started going viral.

here’s the letter I left to my parents before moving out in english and spanish, I’m never changing who I am 🏳️‍🌈 pic.twitter.com/V2qjdLQ1qW

You’re free. You got this. We all believe in you

I came out to my dad a year ago after my junior year of college. I never returned to his house after that semester. He told me I’m dead to him. Not returning to that place was the best decision I’ve made ever. You should never hide and if this is what it takes DO IT! https://t.co/mbJi8ehRcZ