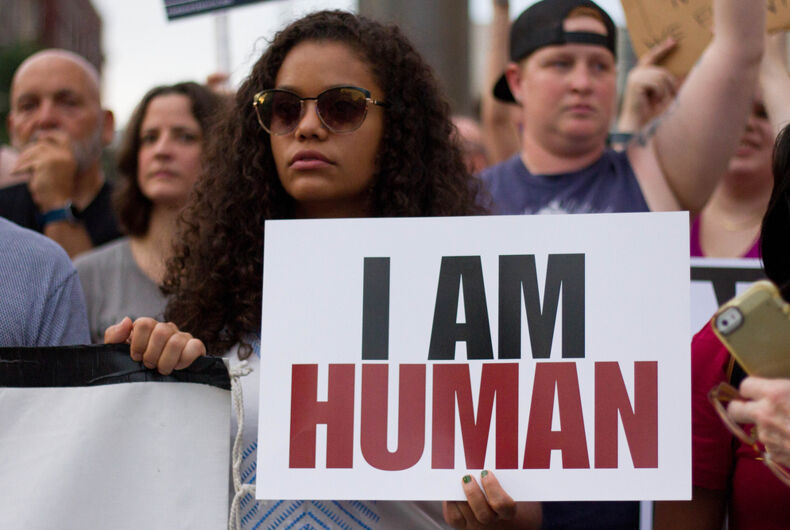 Demonstrators in Philadelphia participate in a rally against white nationalism and other forms of racism and hatePhoto: Shutterstock

In his continuing and seemingly endless reality show series, “I Know You Are But What Am I?,” our Fifth-Grader-In-Chief has now referred to two prominent black men as racists, men who have spent their entire adult lives in the cause of working to end division and racial strife.

Congressman Elijah Cummings, chair of the powerful Oversight and Reform Committee, had a heated exchange with Homeland Security Secretary Kevin McAlleenan demanding “improvement” at southern border facilities where deplorable and unsanitary conditions have been reported.

Cummings, who serves Maryland’s 7th congressional district, accused the Trump administration of having “an empathy deficit” in its abusive handling of refugees seeking asylum from devastating environmental conditions in their home countries. So, of course, Trump took to Twitter.

Trump couldn’t let it go at that, so he added more invective the next day.

If racist Elijah Cummings would focus more of his energy on helping the good people of his district, and Baltimore itself, perhaps progress could be made in fixing the mess that he has helped to create over many years of incompetent leadership. His radical “oversight” is a joke!

Just one day later, Trump expanded his attacks to Reverend Al Sharpton who spoke at a Baltimore press conference in defense of Cummings:

Al Sharpton would always ask me to go to his events. He would say, “it’s a personal favor to me.” Seldom, but sometimes, I would go. It was fine. He came to my office in T.T. during the presidential campaign to apologize for the way he was talking about me. Just a conman at work!

I have known Al for 25 years. Went to fights with him & Don King, always got along well. He “loved Trump!” He would ask me for favors often. Al is a con man, a troublemaker, always looking for a score. Just doing his thing. Must have intimidated Comcast/NBC. Hates Whites & Cops! https://t.co/ZwPZa0FWfN

Trump brought his tweets to life in front of a press gaggle on the White House lawn by reiterating that both Cummings and Sharpton are “racists” while claiming that he is “the least racist person in the world.”

So, Trump accuses Cummings and Sharpton of being the real racists, even in light of criminal convictions against Trump and his father for violating the rights of people of color in the rental of Trump properties, his call for the execution of “The Central Park Five” for a crime they did not commit, his statements that Congressional representatives should “go back” to their “crime infested countries” even when they are native born citizens, and so many other cases too numerous to count.

The critical question that must be addressed, however, is not whether Cummings and Sharpton have acted in a racist manner, but on a larger basis, whether any person of color can be racist within the all-embracing racist past and present of the United States.

Or can women be sexist toward men, LGBTQ people be heterosexist toward straight people, and so on down the line of all the varieties of oppression?

Let’s first begin with an overarching definition of the concept of “oppression”: a noun meaning an unjust or cruel exercise of authority or power on three levels — the individual-interpersonal, institutional, and societal-cultural.

Since we can never truly know what a person holds in their heart, we need to avoid defining people as “racists,” but instead, rate their words and actions.

A simple equation represents this: Oppression = Prejudice + the Social Power (O = P + SP) to enact that prejudice on all levels.

Certainly! They can feel, speak, and act negatively toward individuals within their interpersonal interactions. For example, they can refer to others by using bigoted language and they discriminate against members of these dominant groups in their personal affairs and practices.

But do people of color, for example, have the social power to lock out white people as a group on the larger institutional and societal levels from the housing market, from attending the schools of their choice, or from attaining the best according to their abilities?

“Oppression” is much more than a simple term, and the factors that comprise it exhibit more than a linguistic exercise or word game. Oppression centers on issues of power and privilege, of domination and subordination on multiple levels, and of historical legacies that continue to this day.

Referring to people of color, and particularly Elijah Cummings and Al Sharpton, as “racist” severely skews power relationships and distorts the history of racism in the United States.

Besides, we see absolutely no evidence that either Cummings or Sharpton hate white people. What we have clearly witnessed are two men, Cummings, the son of former sharecroppers, and Sharpton, who came as well from humble means as well, who have earned their way into the pantheon of champions of dignity and equality for all people regardless of background and social identities.

Can the same be said for the current resident of the White House, which was built by enslaved Africans?

Commentary
Al Sharpton, can a gay person be homophobic, can a person of color be racist, can a woman be sexist, Donald Trump, elijah cummings