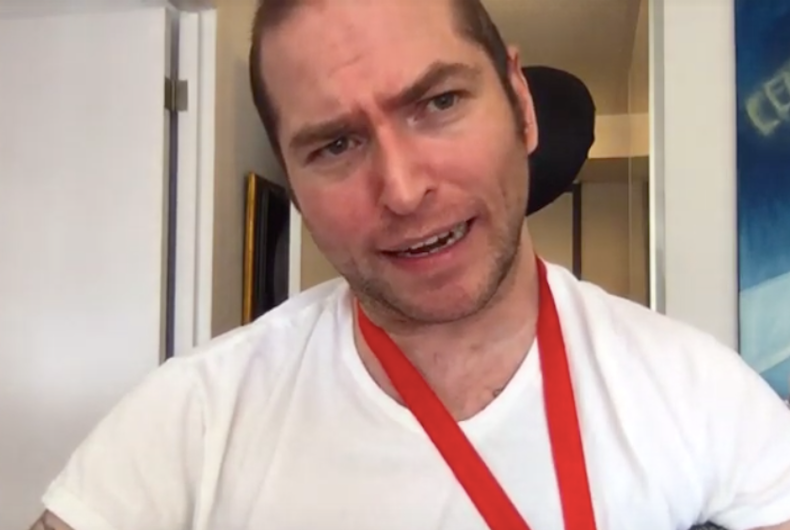 Andrew Gurza, a disabled queer activist who hosts the sex-focused Disability After Dark podcast and is a 2019 “Pride 50” honoree at our sister site Queerty, has alleged abuse by a caregiver assisting him in his Toronto apartment.

Gurza has Cerebral Palsy. It limits the use of his limbs and requires him to use a wheelchair with assistance from a caregiver. As such, he lives in a March of Dimes building which is staffed by individuals who are paid by the Canadian government to help residents with tasks like showering, using the bathroom, eating and getting in and out of bed.

Yesterday, Gurza’s care assistant informed him that the March of Dimes would be short-staffed over the weekend and that no one would be available to help Gurza shower or get out of bed at his usual morning hour. In a public Facebook post, Gurza said this often happens.

But because Gurza had a photo shoot and other appointments scheduled for early the next morning, he asked his care attendant to see if they could arrange for a shower anyway. When the attendant told Gurza it’d be impossible because showering wasn’t an “essential service,” Gurza complained it was “f*cking sh*tty.”

Related: A letter to the “Christian” mom wishing death for her disabled lesbian daughter

At that moment, he said I had to right to say the word ‘f*ck’ and he yanked me out of my shower, wheeled me to my bed and roughly put me back in the sling, hoyer lift and pushed me into my bed. At that time he said “I could have left you there in the shower but you are ‘lucky’ that I have a conscience…” So in his mind he was doing me a ‘kindness’ by yanking me out o the shower and pushing me into my bed.

He advised – I will leave you here until you apologize for saying the word ‘f*ck’. I said – What you are doing here to me is abusive. You are wrong in this and I then swore at him in a moment of extreme personal duress.

I feel like a prisoner here. I am trapped here… abused and rebuked for just saying the word f*ck – even though it wasn’t directed at this caregiver.

Gurza claims the caregiver left him naked in bed without access to his phone and with no indication of when he or anyone else would return, basically confining Gurza to his bed for an hour and a half.

Gurza called the police to report his mistreatment, but the police called what happened a “personal dispute” and refused to file a report or investigate. Gurza also contacted the mainstream media, but they refused to report his story without proof of a police report. He also contacted the March of Dimes and has been informed that he may be asked to attend a mediation session with his caregiver in two or three weeks.

Gurza has since shared his story on YouTube. The video of his story is below:

Beyond the specific of his case, Gurza’s story highlights how often disabled people experience abuse.

It’s unclear how often this abuse happens at the hands of caregivers, but the issue is likely to be under-reported as people with disabilities aren’t always able to report their abuse due to physical/mental limitations or a fear of retaliation by caregivers.

Because of his limited mobility and funds, Andrew must remain in the apartment where his alleged mistreatment occurred and will likely face the same care assistant again soon. He told LGBTQ Nation that he feels trapped and unsafe but will continue to highlight his story to shed light on an oft-overlooked issue.