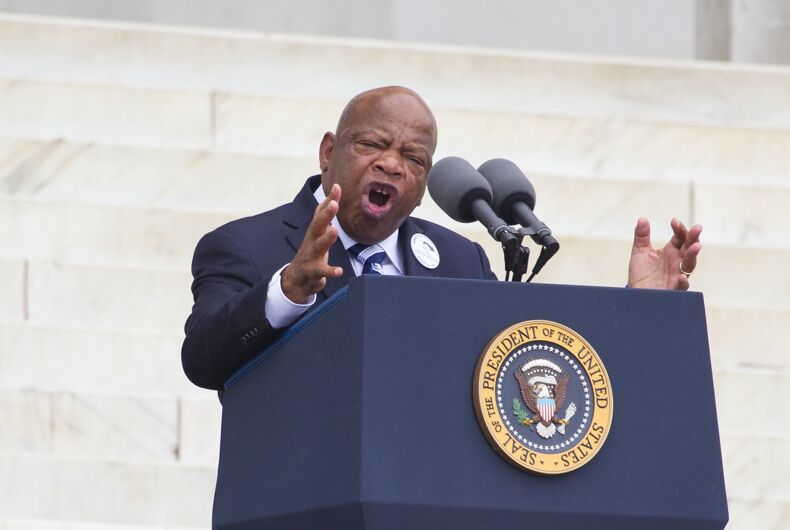 A bill to ban discrimination against LGBTQ adoptive and foster families was introduced in the House yesterday.

Representative John Lewis (D-GA) and Resident Commissioner of Puerto Rico Jennifer González (R) introduced the Every Child Deserves a Family Act, which would ban discrimination against LGBTQ people who want to adopt or foster a child by agencies that receive federal money.

The bill would also ban conversion therapy for minors in the child welfare system.

“Too many children dream of a stable, loving family,” Lewis said in a statement.

“Many adults want to open their homes and their hearts, but they also are facing more and more barriers, because some officials can say they practice the wrong religion, love the wrong person, or are not married.”

He said that the bill “puts the happiness and well-being of our children front and center,” ensuring that more people can provide “a loving, stable family” for children.

Most adoption and foster agencies do not have explicit policies that discriminate against LGBTQ families, but some religion-based organizations refuse to place children with same-sex couples and families of other religions.

Some states have passed legislation banning discrimination, while others have passed laws protecting organizations’ “religious freedom” to place children only with parents that follow their religious litmus test.

The bill has been introduced in every Congress since 2009, but this is the first version to include a ban on conversion therapy.

“There is a foster care and adoption crisis in this country today, with over 442,000 children in care, and over 123,000 waiting to be adopted,” said The Rev. Stan J. Sloan, CEO of Family Equality Council. “This crisis is compounded by discrimination, especially in ten states which permit agencies to turn away qualified foster and adoptive parents.”

“Passing the Every Child Deserves a Family Act will end this discrimination, and help ensure more children find the loving, forever homes they deserve.”

“Given the undeniable crisis in our foster care system today, where too many children age out without finding their forever home and LGBTQ youth are subject to harm from discrimination, the Every Child Deserves a Family Act is vital to the well-being of America’s most vulnerable youth,” said Casey Pick of The Trevor Project.

“We are especially grateful that this legislation would protect LGBTQ youth in foster care from being subjected to attempts to change their sexual orientation or gender identity through the pseudo-scientific practice of conversion therapy.”

About 20,000 children in the foster care system age out of the system each year without ever getting a family.

Another pro-LGBTQ bill was introduced in Congress yesterday.

The gay panic defense is used by people who committed a crime against an gay or bi person. They claim that the gay or bi person hit on them, which made them feel insecure about their heterosexuality, so they “panicked” and lashed out in violence, justifying their crime.

The trans panic defense is when a cisgender person commits a crime against a transgender person and blames the victim. They claim that the victim made them feel insecure in their heterosexuality.

The bill would ban using a “nonviolent sexual advance or perception or belief, even if inaccurate, of the gender, gender identity or expression, or sexual orientation” to excuse or mitigate a crime in federal court.

“Claiming a victim’s sexual orientation or gender identity justify murder or assault expressly tells entire segments of our society that their lives are not worthy of protection,” said Kennedy in a statement.

“As long as gay and trans panic defenses are allowed in our state and federal courts, the LGBTQ community will be deprived of the justice all Americans deserve.”

Its Pride month & I have never been so afraid. I live in Malaysia.