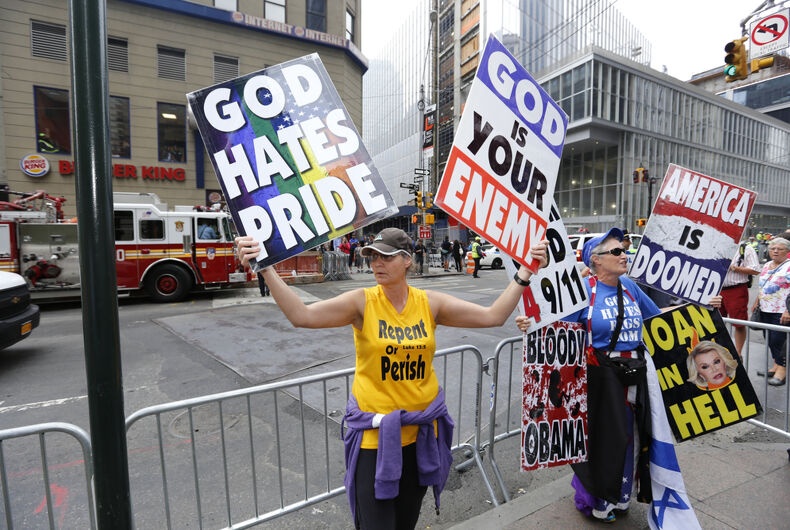 A WBC press release from earlier this month explained why it chose to protest Spelman College and Clark Atlanta University:

“‘The heart of Spelman’s progressive feminist organizations,’ includes the organization ‘Afrekete,’ which describes itself as ‘an all-inclusive organization that strives to offer a safe, creative, and liberating spaces for students across the entire spectrum of the LGBTQIAPD+ community and their allies.’ More evidence does not seem necessary to demonstrate that this college is being grandly paid to produce perverts who aggressively strive to push others toward proud sin and down the path to hell. Repent!

False preacher of the United Methodist Church, who takes on the sundry titles of The Reverend
Dr. Ken Walden, President-Dean Gammon Theological Seminary, will conduct this religious
service of ‘prayer, worship and thanksgiving’ with Clark Atlanta University’s graduating students…. he is worldly, men-pleaser who has made a career of misconstruing, wresting and lying about Jesus Christ and His Word. Flee from whorish, lying pastors!

In a separate press release, WBC explained their targeting of Morehouse College:

Morehouse, founded by Baptists, announced in April, 2019, that for 135 years only male students could enroll, but starting in 2020, females, who pretend that they are males, will be welcome…. DNA don’t lie, bro! Their graduate, Martin Luther King, Jr., had a dream. WBC has reminded you for nearly 30 years on America’s streets, that there were no sodomites in King’s dream.

The Southern Poverty Law Center has called the WBC “arguably the most obnoxious and rabid hate group in America.” The black culture site Afropunk recently referred to the WBC as “the KKKs cousins” (even though the KKK can’t stand the WBC.) Afropunk considers both as homophobic white supremacist groups.

Trump says he supports Pete Buttigieg’s marriage, but what will his supporters say?