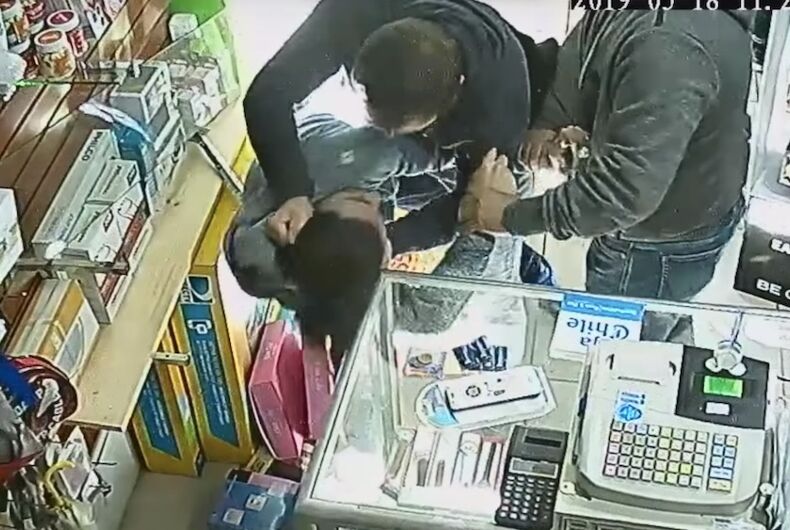 The attack reportedly began when one of the three attackers tried exchanging a previously purchased item for a lower cost one. When one of the shop owners refused the exchange, the customer became angry. As Acosta tried to walk out from behind the counter, the man accosted him, shoving him, grabbing his arm and eventually pulling his hair as he pushed him into the store shelves.

Campos tried to intervene but was quickly overthrown and held at bay while one man shoved Acosta onto the ground, grabbed his hair and began beating him in the head and face with a closed fist. Acosta began fighting back and Campos eventually used a small strap to hit the attacker in the face.

The attacker then threw Campos on top of Acosta and kicked Campos in the head. One of the other men eventually restrained Campos as the main attacker continued to grabbing Acosta by the hair and punching his face.

Video of the attack is below:

Campos said, “Without provocation, without insults or prior discussion, these guys were merciless with Sergio giving him blows of fists and feet in an act of cowardice never before seen in the area and accompanied at all times of homophobic insults. They repeated, “Shut up, f*ggot,” “bottom,” “m*therf*cker,'” Campos said.

“A third one was telling me not to help him,” Campos continued. “When I managed to get loose, they threw me over and I covered my head best I could as they hit me on the head.”

Although police arrested the three men, they were released with a fine of roughly $40. Gonzalo Velásquez, the President of the Movement for Homosexual Integration and Liberation (MOVILH), said that the attack should compel state legislators to consider enhanced penalties for attacks inspired by anti-LGBTQ sentiment.

Velásquez says MOVILH reported the attack to the Ministry of the Interior so that the ministry could provide legal and psychological counseling free to the couple.