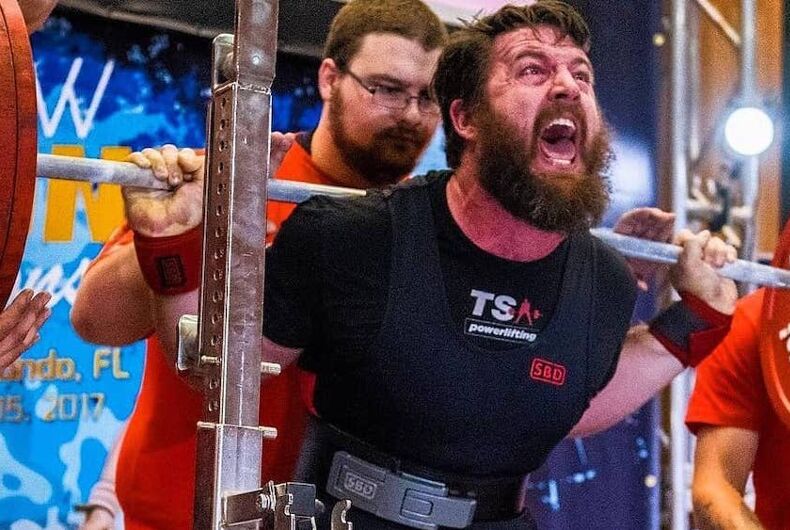 In February, USA Powerlifting (USAPL), the leading U.S. competitive group which organizes powerlifting competitions nationwide, issued a ban of all trans competitors from its events. After an outcry from trans people and allies, USAPL’s national board of governors put the issue up to an official vote. It didn’t go well.

The voted-on policy would’ve allowed trans people to compete in sex-specific competitions matching their gender identities. And though USAPL allowed people to speak for and against the policy before voting, the final vote was 46 to 4 against allowing trans athletes to compete.

On USAPL’s page explaining their anti-trans stance, the group claims they haven’t banned trans competitors but merely forbid anyone who uses hormone replacement therapy as a violation of their drug policy.

In a statement issued before the vote, USAPL president Larry Maile, Ph.D. says that the issue has increasingly made him and others a target in a heated debate:

“I have participated in multiple interviews that proceeded from an advocacy standpoint for transgender inclusion and have been misquoted, given several seconds to produce sound bites and set up as a straw man. I have been called transphobic, bigoted, racist, my family contacted directly. Our executive members have been harassed and family members threatened, and our elite level female athletes contacted and harassed as well. There is no point in trying to convince a partisan crowd. For our part, we will discuss this among our members, review all sides of the issue and come to what we feel is the best decision for our organization and in our sport…”

The LGBTQ sports site Outsports notes that Virginia powerlifter Mary Gregory had her record-breaking trophies and records taken away in light of the ban.

Outsports co-founder Cyd Zeigler writes that the “’bone density’ red herring” describing physiological differences between male and female competitors is often used to disqualify trans women from competing even though the bone density of some black women has been found to be higher than that of white men. Lots of factors affect bone density and that alone shouldn’t be worth disqualification, he writes.

In response to USAPL’s anti-trans vote, the Women’s Strength Coalition issued a statement which said:

“From the beginning of the National Governing Board (NGB) meeting, USAPL leadership made clear their gross misunderstanding of transgender people, healthcare, and well-being. Without any prior notification to the policy drafter and presenters, USAPL allowed Dr. Kristopher Hunt, USAPL’s TUE Committee Chair, to present a powerpoint laced with anti-transgender rhetoric. Rather than focus on transgender participation in sports, Dr. Hunt compared cisgender men to cisgender women, dead named Mary Gregory, and mentioned that he and Larry Maile, USAPL President, have been working with Fair Play for Women, a U.K. based anti-transgender organization, to develop a transgender policy….

USAPL has continuously operated in bad faith throughout this process…. we question [their] intention and authenticity behind the offer…. but our fight for trans inclusion is not over. Women’s Strength Coalition and Pull for Pride will not stop pushing for a trans affirming and inclusive policy until all are welcome on the platform.”

Pull for Pride is a powerlifting group that raises money for LGBTQ youth.

Conservatives got triggered by a Mothers Day commercial from Chips Ahoy!